Mark O'Sullivan Mark O’Sullivan is a UEFA A licensed coach based in Stockholm, Sweden. Mark works at top Swedish club AIK as coach and player developer. He also delivers coach education courses for the Swedish FA and has run many youth social projects He has his own blog, 'Footblogball' and also works with Espanyol Football a co-operation with La Liga club, RCD Espanyol. Mark is a regular contributor to Player Development Project. 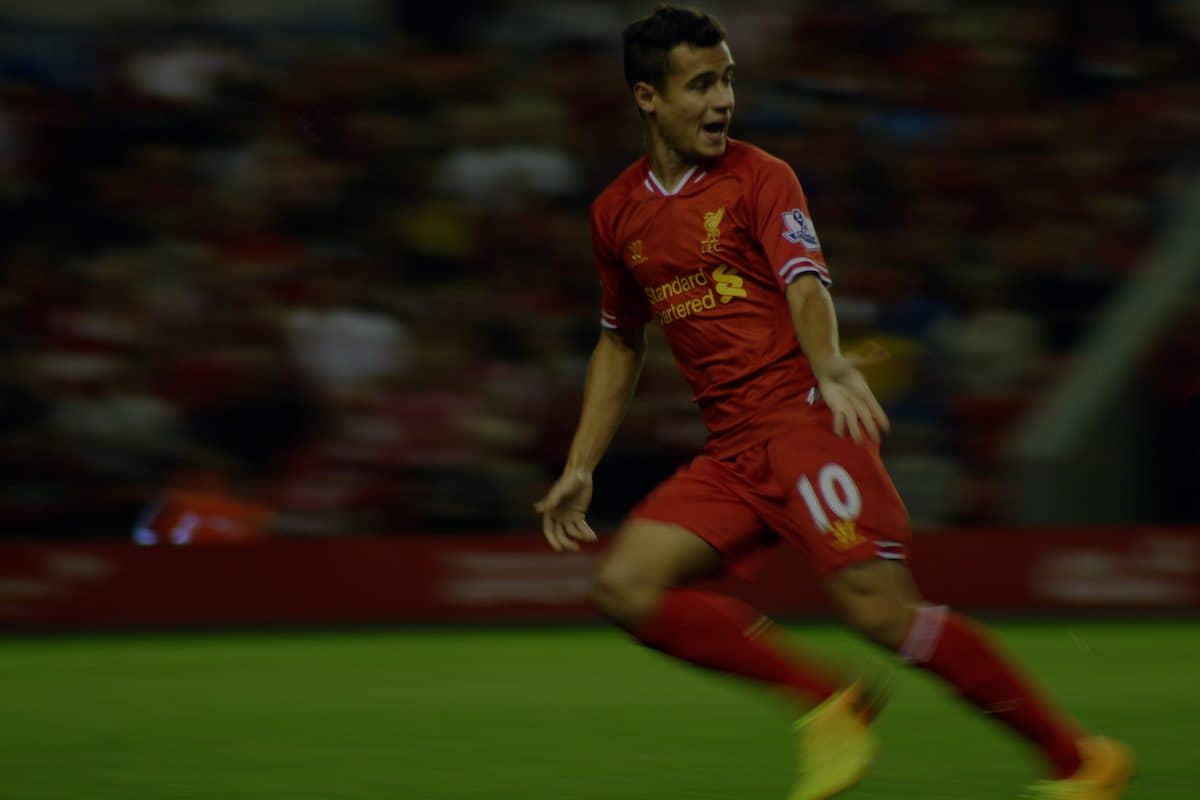 Talent ID is a topic that polarises opinion. In recent years, professional clubs have begun their search for ‘talent’ at a younger and younger age. Mark O’Sullivan examines the talent identification landscape and questions whether the process is merely a survival of the fittest.

According to Darwin’s theory of evolution, organisms which are better adapted to their environment tend to survive longer. Does the environment we create influence the selection process and favour those that possess attributes that give them a temporary advantage while at the same time disqualifying those who at that moment in time are struggling to adapt?

Adaptive behavior is key to the survival of the human race and specific to football, a trait of high quality players. However if the early environment supports only temporary adapting systems (in this case the young player) then those that are better equipt to adapt in the long run may well be lost to us forever.

Are some systems and structures just counterproductive ideologies that that are in conflict with development (learning & biopsychosocial) and the young player’s natural learning process? We should of course remember that struggle is also part of the learning process. What are we doing to help players overcome those struggles that will appear during their (non-linear) development?

In a recent paper, Bailey and Collins introduce one of the most common models used in talent identification, the Standard Model of Talent Development (SMTD)

This is a pyramid structure that is based on erroneous presumptions.

The selection process is done at the cost of the wider group where focus is placed on those who have been identified as talented ( Bailey, R.P: & Collins, D. The Standard Model of Talent Development and its Discontents, Kinesiology Review, 2, 248-259)
Selection: Based on current performance. Identify those as talented as early as possible. Early specialization is deemed necessary to reach elite performance level in the future. Early performance and ability is necessary for success in the future.
De-selection: Hard to return to the system. Questionable selection criteria (often based on early physical characteristics) 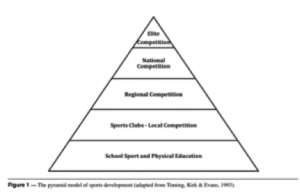 District team selection often begins at the age of 13/14 and is part of this pyramid. Its influence is felt years before the actual selection process. I recently spoke with a Swedish U17 youth international who said that this process can create and feed a stressful environment. Over a year before the district team selection, every day at school, at training, on social media each match or training performance was put under the microscope of analysis. “How did you play? How did I play? As well as being physically tired you would be mentally tired as well”. The player went on to say “I was lucky because I had an external support structure, family and good adult mentors that really helped me, I don’t know how I would have coped otherwise”.

There is no convincing evidence that most sports require an early investment of training in one activity. In fact, what evidence is available suggests that across a number of eventual elite players, early specialization is negatively correlated with eventual success (Gullich, 2011).

In the paper, The Standard Model of Talent Development and Its Discontents (Bailey, R.P; & Collins, D.) it is suggested that “the apparent success of the SMTD is ultimately an optical illusion as there is no way of knowing who might have succeeded through different systems, and who were de-selected from the system but might have (under different circumstances) gone on to achieve high performance”.

The paper goes on to suggest risks associated with ill-focused of incorrectly administered pyramids.

Judging early performance during the formative years does have its problems. This is true especially when judging and identifying something that is non-linear using what is essentially a linear model.

Are we judging biological maturation or talent?
Dutch Soccer coach Raymond Verheijen has presented data under the title “Growth spurt study in Dutch Youth Academy soccer”. A 12 year study that included 36 professional clubs was carried out in Holland between the years 1997-2009. An analysis of a data base of over 10,000 players was carried out where factors such as height, weight, injuries and date of birth were taken in to consideration. The general idea was that month of birth should have no influence on talent. At the beginning of the study the Dutch schoolboy national teams were selected from August to July. Most players were born in the period August to October (43%) while only 10% of the players were born May-July. This phenomenon is often referred to as the Relative Age Effect (RAE).

Relative age effect (RAE): A bias that seems to favor a higher participation rate amongst those that are born early in the selection period). Hancock, Adler, & Cote in a study from 2013 suggested that RAE is more than just a physical advantage. The research suggested that there are also some powerful social influences at play.

During this study the Dutch FA changed the cut-off date for its national youth teams to the Jan-Dec period. The RAE adjusted accordingly. It seemed that the scouting system was primarily based on how old the player was as opposed to how talented that player is or could be. Countries with small populations have a relatively small player pool. Focusing on winning during the early stages of development just encourages the RAE, in turn making the player pool even smaller. It becomes more about the survival of the fittest as opposed to survival of talent.

The various traits slowly appear and differentiate over time. Infancy, adolescence, and even adulthood will see the latent components undergoing various transformations (Simonton,1999,p442)

In the research paper “Swedish soccer is searching for talent but finding age” Tomas Peterson says why players are chosen in accordance with their physical development is not known “but one may assume that there is a silent agenda dictating that these players will be the most successful in the forthcoming selection steps” from club to district team to national youth team. The material and data collected “indicates that selection on the grounds of physical development is already at work in groups of 5-12 year olds and “ and the effect of this process is very clear when these children reach 13 and enter an even harder selection process. It is Tomas Petersons opinion that this is counter- productive to the development “of all the football talent that exists within every yearly cohort of girls and boys. I also believe that its goes against the goals of both the sports movement and the community in general”.

Many current methods of focusing on early indicators of talent are very static and linear approaches. They ignore the fact that development is individual and that differences in performance can be explained by differences in maturation. Coaches that judge early talent evaluate and focus on the contemporary level of performance where physical characteristics are fundamental factors in the talent identification process. This brings to the surface three fundamental problems that need to be addressed with early talent ID.

If we want to keep players viable over what is essentially a long, complex and sensitive development process then the aim should be to keep as many as possible as long as possible active within our sporting organization.

What are we doing to help certain players overcome struggles that will appear during their non-linear development? What role does the environment play in creating these struggles? We should remember that failure and struggle is also part of the learning process. Our environment should be a place where these failures and struggles can be met head on and dealt with through patience, encouragement, understanding and support.
Does the environment we create influence the selection process and favor those that possess attributes that give them a temporary advantage while at the same time disqualifying those who at that moment in time are struggling to adapt?

Mark O’Sullivan is a UEFA A licensed coach based in Stockholm, Sweden. Mark works at top Swedish club AIK as coach and player developer. He also delivers coach education courses for the Swedish FA and has run many youth social projects He has his own blog, 'Footblogball' and also works with Espanyol Football a co-operation with La Liga club, RCD Espanyol. Mark is a regular contributor to Player Development Project.

The ‘Cupfinalseminaret’ in Norway provided PDP Editor, Dave Wright with an opportunity to gather the opinions of some leading Scandinavian figures. In this fascinating round table discussion on the women’s game, we talk leadership, psychology and coach/player development with Even...

From Caution to Courage: The Role of Character Strengths in Coaching

In this article, resident positive psychology expert Lara Mossman looks at good character through a strengths lens, focussing specifically on two strengths, courage and caution, and looking at how these can be overused or underused in coaching. We often hear...