Steve Lawrence is a consultant to Cruyff Football and Ajax. With a Masters in International Sports Management, Steve is at the forefront of research into the topic of Relative Age Effect. Here Steve gives Player Development Project readers an exclusive look behind the scenes at Ajax’s brand new academic education centre, a building he worked on as a consultant architect.

The project for the new academic education centre at Ajax football club came about following discussions about the nature of pedagogy in the elite youth football environment. Ruben Jongkind (who was until recently the head of youth development for Ajax) and I had the initial discussions and the idea was developed with Ed Lefeber, Michael Kinsbergen, Edwin van der Sar and Johan Cruyff.

Ajax was already the leading player development club in the world, with the player development philosophy in the modern era going back to Vic Buckingham, Rinus Michels and Johan Cruyff. Their legacy has more recently supported Louis van Gaal, Ronald Koeman and Frank de Boer, the latter of whom was the first team trainer during the academic education centre project.

The essential concept which evolved during our discussions was that the development trajectory of every player is unique and that the club could do more to create an environment in which that individual trajectory could be nurtured to maximize potential.

We recognized that the relationship between academic development and sporting development were so interdependent that it was in the interests of the club to take an even more proactive role in player academic education by developing facilities on-site.

We also realized that the relationship between the football training, the trainers, the players, the academic staff and the on-site facilities needed to change somewhat if this was to succeed and that in future the football curriculum and the academic curriculum would need to coalesce.

The model for this pedagogical thinking is taken from Montessori philosophy where children progress through their education at their own pace guided by expert teachers in a carefully prepared environment.

The first revolution that Ruben implemented was the removal of the ‘kingdom coaching’ model where a single coach is assigned a single team and is then judged at the end of the year based on where in the competitive league the team comes.

Instead, Ruben reorganized the youth cohort into 3 broad groups: 9–12, 12–15 and 15–19. There are younger players at the club but the same level of responsibility is not taken for their educational development.

This idea of mixed age groups requires an open mind and a different mindset in order to work. Firstly, a group of trainers must share responsibility for the larger group of players, coordinating their training time and their match schedule, and communicating with each other in a way that they are very unused to. This was, and remains, a very demanding adjustment.

Secondly, such a structure allows for peer-to-peer learning, and whilst this is extremely beneficial it too demands rare coaching skills.

Thirdly, with larger groups a mentor structure becomes necessary for pastoral and academic issues because maturation is now on an individual trajectory rather than being a dynamic of the team.

Fourthly, the ‘prepared environment’ of the training ground has to be adjusted.

Those who know the Ajax training ground, called ‘The Toekomst’ (The Future), will know that it is already very well designed and has the existing attribute so rarely seen of having the core buildings at the very centre. Our first decision was to locate the new educational building at the very heart of things. This emphasizes the commitment the club is making to academic education and shows the commitment to the holistic development of the player and provides a visual pathway from academy to first team.

The players themselves have named their new building – it’s called ‘De School van de Toekomst’ ‘The School of the Future’. 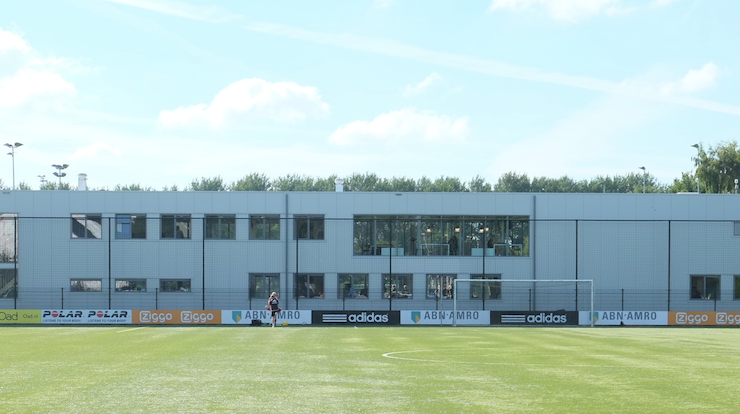 The hub of the building is the central space; it’s a double height space with the library around the gallery at the upper level. Its focus is the fully equipped kitchen which is intended as a teaching space as well as a practical kitchen for the players to learn to cook and to study nutrition. It looks out over the first-team training pitch on one side and a youth exhibition match pitch on the other side. It’s the social focus for the players on the training campus. 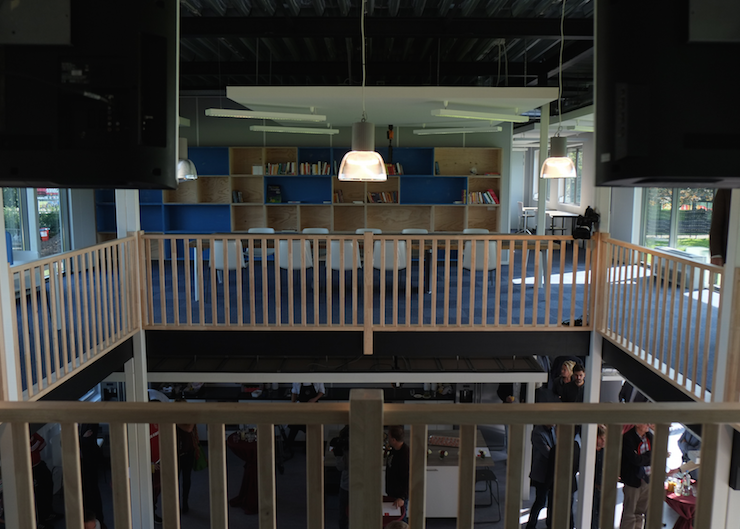 From this space you can also see the Amsterdam Arena, the 53,000 seat stadium where the first team play matches. 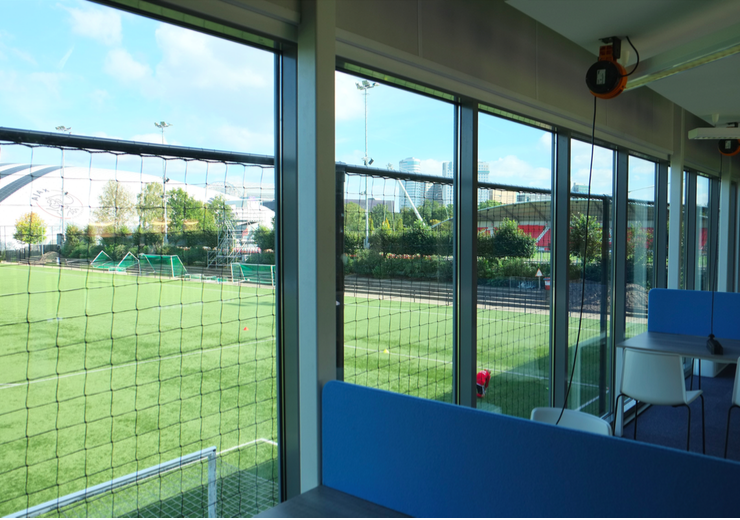 The hub space has conventional tables along with low sofas and a large video screen for all kinds of presentations. The space is big enough for the entirety of the 220 players plus coaches, tutors and mentors to meet together. 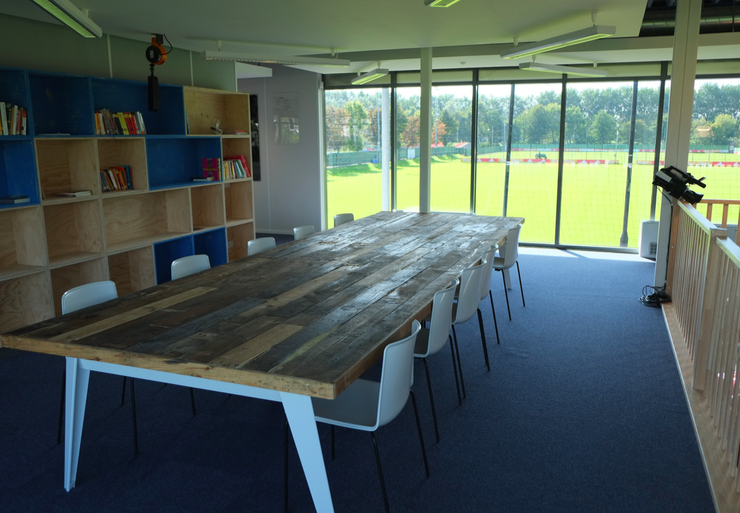 The building has very few doors and constitutes a connected space so respectfulness in terms of keeping noise down is essential. The floors are mostly carpeted to help this and soft furnishings reduce noise levels.

There are no dedicated tutor rooms apart from an open area for administration close to the main entrance which is itself a double height space looking out across the reserve team exhibition pitch and on to the Amsterdam Arena. Tutors and mentors mingle with the students and work amongst them. Coaches are welcome too and they use the kitchen and meet around tables throughout the building. 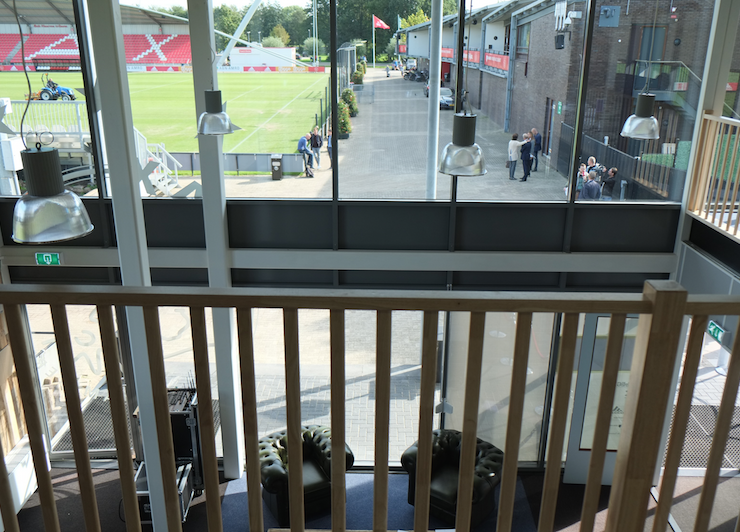 Electricity cables are suspended from the ceiling and drop down on pulleys wherever they’re needed.

A multimedia space houses the Ajax TV studio and is available for students to do yoga, dance and music.

A sleep pod area will be available with 16 spaces for power napping – an essential part of the day proven to help recovery from arduous training and to reduce injuries.

For summer use doors open out onto a terrace overlooking the first-team training pitch.

The building was completed in September 2015. 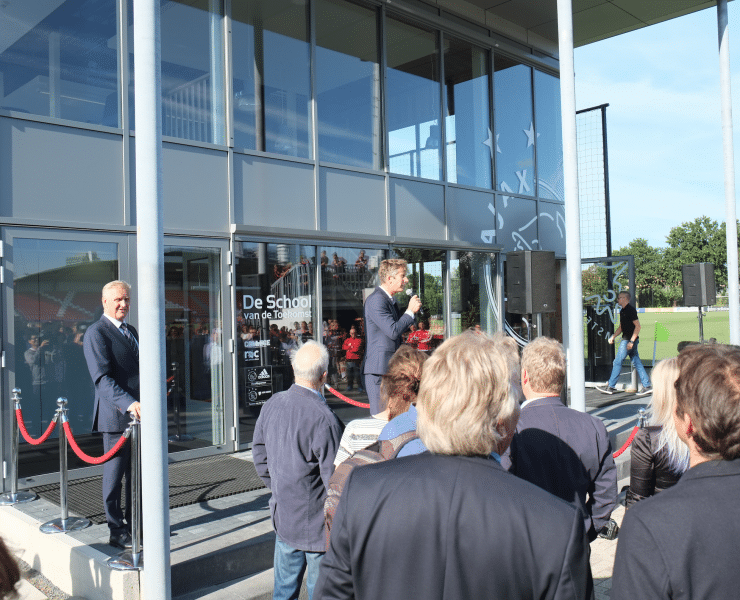 This project sounds simple enough, but its future development will depend on overcoming some difficult hurdles. The first I’ve already mentioned is the coaching mindset which has to encompass the wider multi-age group and not just the year group team.

The second is the formulation of a coherent holistic curriculum which coalesces the football and the academic education in a way which meets legislative requirements as well as football development needs.

The third is establishing a ‘training of trainers’ project to forge ahead in what is an entirely new educational field and to bring on the next generation of coaches, giving them the pedagogical knowledge to go with their football coaching skills.

Perhaps one place where no change is needed is with the children, they are always motivated and in an environment like that provided by Ajax – who wouldn’t be?

Explore our online soccer coaches where our team will guide you, step-by-step through real coaching scenarios, whether you’re a seasoned coach or you’re brand new to the game. Courses are designed and taught by some of the world’s best youth coaches and coach educators. 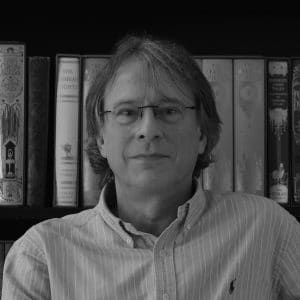 Steve Lawrence Steve Lawrence is a consultant to Cruyff Football and Ajax in the Netherlands. With a Masters in International Sports Management, Steve founded the Football Analytics Lab and is at the forefront of research into the topic of Relative Age Effects.
Previous
Next