Ben Bartlett, Senior Youth Coach Educator at the Football Association, gives some fascinating real-life examples to explain the importance of aligning a team’s ideal model of performance with the capabilities and behaviours of its players and the practice of its coaching.

There is a Japanese proverb, highlighted by James Kerr in his book ‘Legacy’, which states that “Vision without action is a day-dream; action without vision is a nightmare”. With this in mind, lecturer and coach developer Bob Muir proposed the model below, asking coaches to consider whether, in the work they do with their players, the following four aspects align: 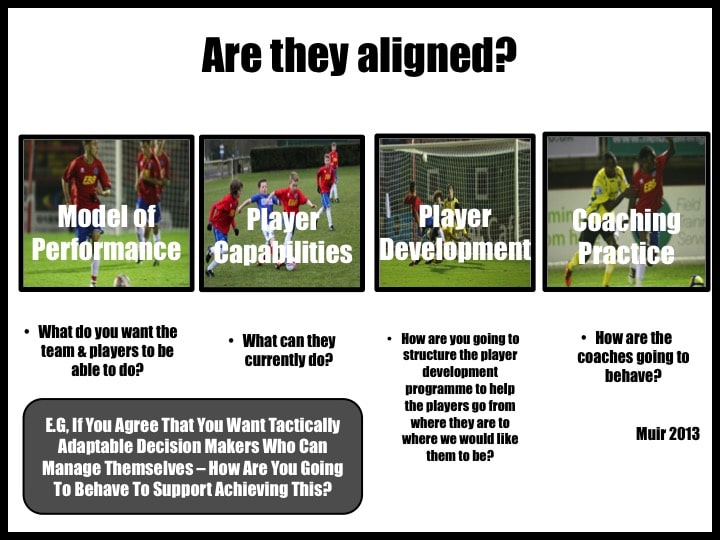 Here’s an example to explain the importance of the Model of Performance, or vision. Let’s assume that part of your Model of Performance is for your team to conduct a high press in all games. In that case, you may need to identify what demands that Model places upon the players. This could be accurately achieved by researching across the highest performing teams (across a number of games) what the Passes Allowed Per Defensive Action (PPDA) measure is. This is calculated by dividing the number of passes allowed by the defending team by the total number of defensive actions (tackles, interceptions, challenges, fouls):

PPDA = number of passes made by attacking team divided by number of defensive actions.

“We can begin to look at what our players are currently capable of in relation to the target and construct a programme of training to support the team to meet it in all four corners.”

Both of the above values will be calculated with reference to a specific area of the pitch. Essentially, the lower the PPDA value the higher the levels of intense pressure. Therefore there will be a requirement physically for a team to press intensely to attain a low PPDA score.

Once we have a picture of the PPDA we would like to attain, we can begin to look at what our players are currently capable of in relation to the target and construct a programme of training to support the team to meet it in all four corners.

Here, PPDA is only one aspect of a performance model, but it is a useful example to illustrate the point.

In a previous role, my colleagues and I were charged to develop a performance plan for an elite women’s football club to support the first team to succeed, underpinned by a philosophy and development programme for young players from age 8 upwards.

Our vision contained elements associated with performance goals for the team, and targets for player development, to try to combine the importance of senior success with an internal player development pathway.

Within this vision, we outlined a playing approach that contained three elements for ‘in possession’ and three for ‘out of possession’. For example, there were three considerations for the ways we wanted to play out from the back with accuracy: ‘Box’, ‘Bowl’, and ‘Basin’. These are shown in the diagrams. 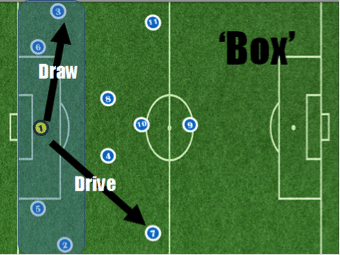 Some, most or all of the defensive players drop within the depth of the box to receive. This would encourage us to play short to draw the opposition on or drive past the press. 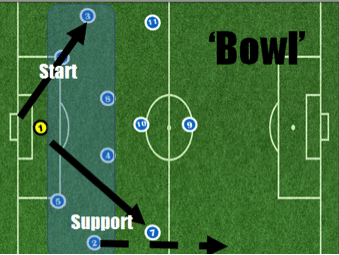 The traditional shape associated with playing out from the back. This provided the opportunity for Centre Backs and Full Backs to receive and either Start the attack or Support it with attacking movements.

In this situation, the full backs commence in a very high position, generating space for the team to either play In Between (the space created by the full backs being high) and for the wide forwards to come In Field.

These were principles of the way we wished to play. Our coaches worked with their players to practise each of these and supported them towards making decisions about when each was appropriate.

When the teams played 11 vs. 11 we adopted a two-system approach (4-4-2 and 4-3-3), with the plan of playing both systems equally so that the players experienced playing out within different systems. The systems were chosen based upon one which our first team played and one which our home International squads played at that time. This supported some variability but within structures that the players were likely (if we achieved our vision) to experience as they progressed. This was supported by a player rotation policy, allowing players to experience up to 3 different positions in the 11 vs. 11 formats, with an even more flexible approach in the younger age groups.

“If your vision is for tactically adaptable players then the coach behaviours should, probably, provide the opportunity for players to develop to reflect this.”

This is an example of how the coaching behaviours and player development programme aligns to the Model of Performance. If your vision is for tactically adaptable players then the coach behaviours should, probably, provide the opportunity for players to develop to reflect this.

So, how do we support the individual development of players within an overall club vision?

Pam Richards’ work on decision-making in elite sport suggests that to generate enhanced decision-making skills in complex environments (of which football is an example), it is valuable to:

This approach implies a greater ownership for the players to understand and make decisions within a shared idea of how the game can be played.

As an example, we used to support the development of an attacking player who joined our club at 10 and, from our initial profiling, was quick, strong and powerful with the ball at her feet, particularly when facing towards goal. Her technique and decision-making, particularly when playing between the opposition’s midfield and defensive lines, were areas to improve.

“By ignoring this player’s struggles in playing with her back to goal and between the lines we may be failing to support her to achieve her potential.”

Initially as coaches our eyes were drawn away from the areas to improve, because this player was effective – she scored many goals and had an impact on games. However, to fulfil our model of performance, we were conscious that by ignoring this player’s struggles in playing with her back to goal and between the lines we may be failing to support her to achieve her potential. This player, understandably, often resisted the decision to come short to get on the ball as it often didn’t go particularly well.

Our job was therefore three-fold:

The players’ involvement in this process was crucial; both to empower them to drive and lead their development and to support their understanding of its value in their collective growth.

We utilised video analysis, notational analysis (assessing how often certain players made certain movements and/or performed certain actions) and player-to-player feedback to build visual examples, numerical statistics and player-led qualitative discussion. This generated a picture of behaviour that we could measure and, over a number of seasons, support the development of a more rounded player. This player has since played Premier League, Champions League and International football.

This player’s challenge was individual to her; however, it was necessary to share this with the other players and link it to the overall model of performance to make sure that as well as our collective model being shared, the individual stuff was too. While this requires an environment where individual and collective trust are key principles, this is a key psychological and social aspect of the process.

Additionally, like the player in question, every player will have something(s) that they’re practising – the challenge for the coach is to seek to align and support the management of individual player needs within a collectively agreed model. We also adopted a player match-day experiences system (below) which allowed us to organise and track the experiences each player would be exposed to:

In the centre of the model is the player. We asked the age group coaches at our club to consider:

Our job was to provide a variety of experiences and then track the experiences the players were exposed to, preparing them for the future by not necessarily repeating the same experience over and over but providing a range of exposures that could support them to be adaptable and responsive.

This was in 2006, inspired by the vision for women’s football (and the innovative people driving it) in England which encouraged varied playing formats (5, 7, 9 & 11-a-side) within the Centre of Excellence Programme and to provide variety within the games programme (e.g. playing against male teams, travelling overseas, playing in stadiums). In many ways, these ideas and the drive of the governing body to implement and encourage them set examples that both myself and many others have been inspired by.

As a footnote, before Christmas I was speaking to a club development officer at a grass roots club near to me, who has spent a considerable amount of time establishing a club ethos and a development framework to support the adults and children’s behaviour.

Their vision was quite different from the one stated early in this piece. Theirs was:

As a result they tracked whether every player got fair playing time across the season; examples of supportive and collaborative behaviour by players and coaches, which they rewarded (instead of top goal-scorer, league winners etc.); and had coaches meetings and rotation of coaches to share experiences and work with each other’s teams.

This was excellent. They had a clearly stated vision (or model of performance) which aligned with their behaviours and development principles. To achieve your aims, agree what it is that you want to achieve and build a development programme and behaviours that support this. When all are aligned, you’re more likely to achieve these goals. 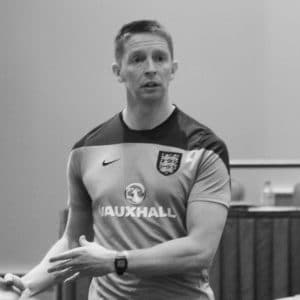 Ben Bartlett Ben Bartlett has been involved with The FA as a coach educator since 2007. Now a Senior Youth Coach educator, Ben has also previously worked at Chelsea FC Ladies as General Manager & Director of coaching and is known as a real innovator in coach education in England.
Previous
Next