An inspirational chance meeting with a legend and a blog post that reiterates the value of mentors. Former US Men’s National Team Player & Player Development Project Contributor, Erik Imler talks about the impact Johan Cruyff had on him as a young player.

Not many would argue that nearly my entire identity is this game we all love.

While I played a little basketball, some baseball, tennis on occasion and even tried wrestling in my high school years (that did not last long), soccer is the game that I gravitated towards most. But as I think back to my most formative years, it was the lure of the local professional team that cemented my love for a game.

Growing up in a small but soccer-rich town in Maryland, many kids my age were drawn to RFK Stadium each weekend to watch the local NASL team – the Washington Diplomats. I was one of them. I collected lots of Dips paraphernalia – the pennants, t-shirts, mini-balls. I knew all the players – Bill Irwin, Alan Green, Ken Mokgojoa, Tony Crescitelli, local hero Sonny Askew, Wim Jansen, Bobby Stokes, Juan Lozano, Tommy O’Hara, Thomas Rongen…and the legendary Johan Cruyff.

Johan was only a Washington Diplomat for the 1980 season. But something memorable and unforgettable happened that summer. A chance meeting with Johan that I have talked about with such reverence for most of adult life. The funny part is…while I understood that he was a pretty big deal for the Washington Diplomats, I don’t think I ever realized the magnitude of my opportunity as a 9 year-old.

My dad, a school teacher by profession, worked with someone who knew Johan’s wife Danny Coster. Somehow, through that relationship, I found myself in downtown Washington, D.C. one summer afternoon in 1980 with Johan himself. We passed my rubber K-Mart Mikasa soccer ball back and forth in the street in front of his D.C. condo. I don’t remember what we talked about – probably about my poor ball striking technique and how it would need to improve if I was ever going to be a player.

After a quick kick around, we walked over to the steps which led to his front door. I picked up my ball and began to follow him up the steps. He turned to me and said, “No. You must roll the ball up the steps with your right foot then back down. After that, do the same with your left foot.”

Only then, was I allowed to enter the condo.

For sure, I struggled a bit to accomplish the task. When I finally made it to the front door, I saw something that I will never forget. As the door swung open, approximately 20-25 brand new pair of Puma Kings lined the foyer wall. It was amazing! That image will be forever burned into my brain.

My dad often reminds me how personable he was – how much of an impact he left on my dad regarding his willingness to have (what I can only imagine to be) very novice soccer conversations with a young boy and his father. To this day, I can’t tell you how long I had the fortune of spending one on one with him or what we could have possibly talked about. All I know is – this chance encounter with one of the world’s greatest players – (while I didn’t realize it at the time) has had such a big impact on my life (as you can imagine).

I can only imagine that due to this unique experience, Cruyff has been my favorite soccer personality. Of course as a player, but even more so, as a manager. As a player, he was an artist. As a coach/manager, he was an innovator. I’m intrigued by his though-provocing outspokenness. You might be familiar with some of his Cruyff-isms:

My soon-to-be 11 year-old son is a soccer player. He loves to play the game. Whether he will one day “make it” as a soccer player in the United States is anyone’s guess. I can only hope that one day in the near future I will be able to introduce my son to a soccer superstar. What impact will that have on him? Will it serve as a lightning rod of inspiration to this beautiful game like it did for me?

Erik Imler is a retired professional player & NCAA Champion (1989,1991,1992). Erik played MLS and featured on the 1992 U.S Men’s National Team. Erik is determined to change the landscape of youth club soccer in the USA. Following his playing career he has gone on to be the Olympic Team Coach (youth, collegiate, U.S. Youth National Teams), a Youth Academy Director and holds the U.S. Soccer ‘A’ License.

Passionate about making a difference, Erik is dis-satisfied with the status quo of youth soccer development in the United States.

You can read more from Erik here. 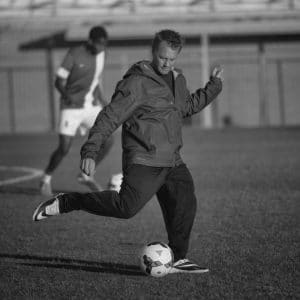 Wesley Sneijder has gone from playing street football in the Netherlands to becoming a Champion’s League-winning superstar. We caught up with Wesley to discuss his development, how he has transitioned between football cultures on his journey, and what he believes best enables creativity to flourish. Wesley Sneijder has played for some of the biggest clubs and in some of the biggest games of the last 10 years including FIFA World Cup and UEFA Champions League finals. A graduate of the famed Ajax Academy in Holland, Sneijder broke…