PDP Lead Researcher James Vaughan poses the question to coaches: are we competing or are we collaborating? In this article, James discusses the concept of ‘water’ and its implications on an individual’s approach to coaching.

One of the most important questions you can ask as a coach is: Are we competing or are we collaborating?

In fact, it’s one of the most important questions you can ask any group of people intending, attempting or pretending to work together. I’ll admit this is a strange statement from someone who’s constantly ‘banging on’ about the importance of deeply understanding the culture and context before planning interventions or asking questions.

And while I’m not suggesting that this question is a ‘silver bullet’ or a ‘one size fits all’ solution, what I’m seeing in my research suggests it’s an important place to start for many people in many organisations today. The balance between competition and collaboration shapes our contexts, environments, group dynamics, relationships, intentions, football interactions, who we are and how we think.

The balance between competition and collaboration is a key element of our water:

What the hell is water?

There is a lot to unpack in this 5-minute snippet of a 2005 commencement speech. But before we get into that I want to reinforce the entwined and interconnected nature of the fish (us) and the water (our environment, context, ecology).

When Wallace makes the point that his ‘natural default setting’ is to be deeply self-centered, it’s important to remember that this isn’t a natural default setting as such, it’s rather a result of his interactions with his environment – his water. Our thoughts, feelings, behaviors and experiences emerge from our interactions with our water, shaping identity, personality, motivation and many more elements of our psyche.

The most relevant point is that many modern environments, the global water nurtures a deep self-centeredness.

At the level of the individual (us), psychologists have found that ACC (an element of the global macro water) promotes high materialistic value orientations that make people more likely to compete and less likely to collaborate (Sheldon, Sheldon, & Osbaldiston, 2000). The over-emphasis on extrinsic rewards and competition is likely to reinforce:

Not ideal for learning, psychological wellbeing, problem-solving or creativity. Unfortunately, this is how many of us experience sport.

Many people’s default setting is simply to conform to this global water. As Wallace puts it, we are encouraged to sit on the hamster wheel and endure the rat race because:

There are many problems with this, but this article will consider the imbalance, between competition and collaboration in a few different contexts.

When I look back on my adolescent/early adult life I spent a massive part of my life worshipping my own social status and engaging in a constant game of one-upmanship (achievement based competition). At work, at school, at home, online, and especially at football I was competing with everyone in an attempt to collect social status like SuperMario collects coins.

My generation has unique tools to create social hierarchies within hierarchies, and ‘in groups’ within ‘in groups’, and we often slip into a constant game one-upmanship. These tools are, of course, the various forms of social media so many are addicted to.

Wouldn’t it be great if every undercover brag, social media post, or status update was accompanied by the classic 1-up soundtrack?

Making sense of the water at AIK

The competition–collaboration balance is something we’re becoming more and more aware of at AIK FF in Stockholm. The imbalance is one of the reasons the age of selection into the academy has been raised (more by Mark O Sullivan). Young players become controlled by the need to conform to social status criteria rather than being kids and having fun and learning.

Recently we presented some initial findings at the International Congress of Complex Systems in Sport at Camp Nou in Barcelona.

In Stockholm, young and old players  seem to suffer from some manifestation of performance anxiety on and off the football pitch. In fact, this is so wildly appreciated that a major Swedish paper ran a story examining this phenomenon earlier in the year, the report was titled: Stockholm creates more anxiety than dreams.

My own research is starting to suggest that performance (and/or status) anxiety emerges from the dynamic interactions of (in no particular order):

However, these influences are by no means unique to Stockholm or Sweden. They may represent sociocultural constraints embedded within the global water.

While these issues are common to sport and football around the world, the influence in Stockholm is unnerving.

The extent to which a socially orientated context, historically considered a welfare state, striving for greater equality and accepting diversity has been infiltrated by neo-liberal individualism, materialism, elitism, and social comparison is unnerving.

However, this may represent the insidious nature of the neo-liberal agenda and its pollution of our globalized water. The science of complex adaptive systems suggests that our social systems, cultures, ideologies, values, narratives, and mindsets move within and emerge from our water. Consider some emergent features of the global, neo-liberal water in different contexts:

The point is that the overemphasis on (neo-liberal, free market, profit/win at all costs) competition has tipped us wildly out of balance and problems are emerging in many contexts, from grassroots football to corporate corruption and insane global politics. 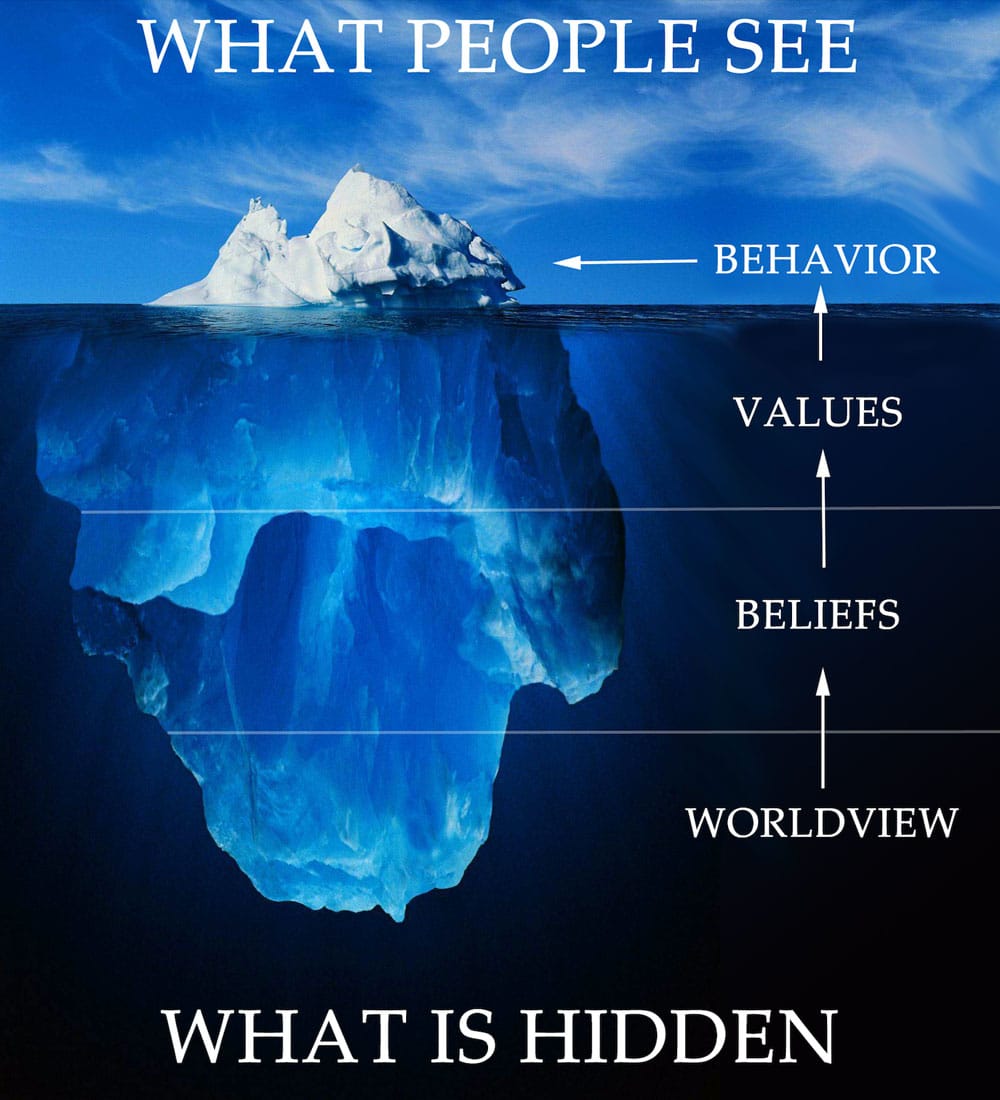 The water we’re swimming in

Schwartz’s (1992) theory of basic human values has spawned hundreds of studies during the past two decades and details how our values exist in a seesaw-like dynamic. In the picture below the values on either side of the circle oppose each other.

When Power (described as social status and prestige, control or dominance over people and resources) and Achievement (e.g. personal success through demonstrating competence according to social standards) are high, Self-direction (e.g. independent thought and action-choosing, creating, exploring, and Universalism (e.g. understanding, appreciation, tolerance, and protection for the welfare of all people and for nature) are low (Schwartz, 1994).

In other words, when self-enhancement values or self-centredness values are high, people are unlikely to be open to change or be able to put others first. Big issues for clubs, teams and coaches. 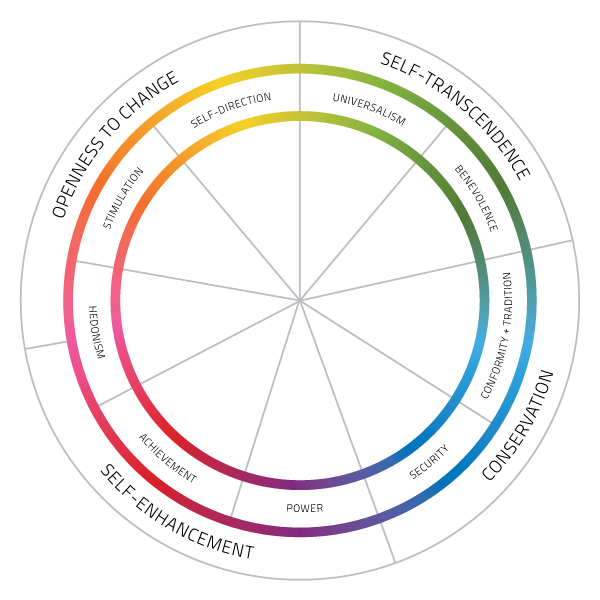 When we are often immersed in neo-liberal, incentive-based, hyper-competitive organizations – the water described by Wallace above – power and achievement dominate people’s thoughts and actions, and self-enhancement emerges as the ultimate goal.

As well as working in a see-saw dynamic, these basic human values have been likened to muscles. The more we use some the stronger they get, but their antagonists (the values on the opposite side of the circle) become weak, making it harder to use them. This is why it’s so difficult for many coaches to become athlete-centered, because the muscles required for athlete-centered autonomy-supportive behaviours are weak while the coach-centered controlling muscles are strong. This is in part due to our global water.

Our water means that values in Power and Achievement are often in the foreground while the values needed to foster creativity, psychological well-being, tolerance, social and environmental welfare fade into the background.

We need to bring balance to the force – and there is another way.

FCB & the Nobel values of competition

Below is the story Football Club Barcelona’s founder Joan Gamper. It highlights the club’s efforts to maintain the their founding values – described as the Nobel values of competition.

“We can’t be our best until you’re your best”

In this fantastic article, Mark Upton talks about the relationship between Rodger Federer and Rafa Nadal.

“he made me a better player”…now we start to get at the heart of what this is all about. It is quite possible that, without Nadal’s existence, Federer may have won many more grand slams. Yet he may not have reached the level of excellence and mastery that he has. At first glance a paradox, now comes a realisation that competition, with yourself and others, is quite distinct from “winning” on the scoreboard and stocking the trophy cabinet. That these great on-court rivals, whilst competing, are simultaneously cooperating. It is not “either/or”, rather “both/and”. By embracing this complementarity the game of tennis (or any sport) evolves and the experience for participants and fans is enriched. Respect and authenticity shine through. We come to genuinely understand what journeys to excellence are all about.

Sadly, this dynamic is so rarely understood that most young people will have their journeys to excellence derailed at some point by adults with a maniacal focus on “winning” (at nearly all costs). I have no doubt that it is possible for many more young people to develop into their own unique versions of Federer’s and Nadal’s – technical, tactical & ethical excellence in whatever sport(s) they have a passion for. Given the right environment, the potential is there.

Wallace – The point of the fish story

Wallace says: “The point of the fish story is that the most obvious and important realities are often the hardest to see and talk about. The kind of freedom that is most precious you will not hear talked about much in the great outside world of wanting and achieving. Displaying the really important type of freedom involves attention and awareness and being to able to truly care about other people and sacrifice for them, over and over, in myriad, petty unsexy ways everyday. That is real freedom.”

There is a dark side to competition. The neo-liberal conception of competition promotes Power and Achievement. Swimming in this water, sport has tended towards a win-at-all-costs mentality. The cost being diminished learning, fun, enjoyment, friendship, respect, humility, sacrifice – the Nobel values of competition.

But there is another side to competition too; enlightened by respect for others, cooperation with others, humility and the co-adaptation that leads to mastery and excellence: as seen in the stories of FCB and Federer/Nadal.

Ask the players: Are they here to compete with each other or work together to improve individually and as a team?

Ask the coaches you work with: Are we competing to see whose team is best or sharing ideas and helping each other?

Most importantly, aim to understand the water, its emergent features in your context and actively promote the values neglected by our global water: Self-direction (e.g. independent thought and action-choosing, creating, exploring) and Universalism (e.g. understanding, appreciation, tolerance, and protection for the welfare of all people and for nature).

Determined to Succeed: An Interview with Liam Ridgewell

Liam Ridgewell enjoyed a 17-year career as a professional footballer. After making his senior debut for Aston Villa, he went on to play over 300 games in English football before joining MLS side Portland Timbers, where he is now a coach. Below, Ridgewell reflects on his experiences in youth football, the challenges of making it to the Premier League, and the mentality required to compete at the highest level. In This Article Developing a Strong Mindset Competing against Elite Opposition The Importance of Overcoming Adversity…