Momentum is a huge element in all sport. Dr. Martin Turner of the Smarter Thinking Project investigates how can players take charge of their own performance learning how to ‘control the controllables’ and implement the control triangle.

Sport is a dynamic, constantly changing, and unpredictable environment to work and perform in. One minute you are on top, the next you are second best. So the idea of controlling what you can to try to minimize such seismic shifts is appealing and potential vital for performance.

Sport psychologists, and indeed many psychologists working in performance domains, promote the philosophy of “controlling the controllables”. In brief, this philosophy suggests that performers invest time and effort into aspects of their performance they have control, or autonomy over, rather than those aspects that they do not have autonomy over. This idea is hugely valuable and can be applied across many facets of sport performance. In the lead up to a competition, the athlete may ensure that their pre-performance preparation is well timed and well thought-out, taking care of broad aspects such as nutrition, rest, and hydration, sticking to their well-rehearsed routines. At a more micro level, they may invest effort into getting themselves in the most effective positions to score goals or effect the game. This “control the controllables” philosophy is linked to the idea of taking care of processes to ensure effective performance, and even though the outcome is ultimately uncontrollable, by controlling the processes the athlete makes success more likely. By controlling their preparation and their intent on the field of play, they put the odds in their favor.

Although it is a popular philosophy, it has been much misunderstood and misrepresented. Some say that you can control everything within your grasp, but if the uncontrollable factors ultimately dictate the result, then what’s the point? Others say that if you get wrapped up too much in controlling everything internal and external to you, then you leave little room for any actual performance related planning. You become a control freak!

What can be done about this? We propose a new way to think about control. Instead of trying to answer the question “how much control do I have within my performance environment and have I controlled everything I can control?” it might be better to ask a completely different question such as “what am I focusing on in the lead up to a performance?”

It is not so much about whether and to what extent you have controlled every possible controllable aspect, but more about whether you are able to focus only on those aspects that are under your control prior to performance, or not. For example, an athlete sitting in the changing rooms waiting to be called out for the start of the competition could be focusing on a range of controllable and uncontrollable things. Common uncontrollables are the crowd, the venue, the opposition, the referee, the court/pitch surface, whether friends a family managed to get tickets for the game, and so on. Mixed in with that are controllables such as tactics, skills, abilities, movement on and off the ball, and your behavior in the warm up. In this moment, directly before performance, is it more beneficial to focus on those uncontrollable factors that are not dictated by you, or on those controllable factors that are dictated by you? We argue that it is more beneficial to focus on the controllables. It is very difficult to focus on multiple aspects at the same time, and therefore we want to encourage athletes to focus on that which is most useful for competition.

My colleague Dr. Carla Meijen and I have developed The Control Triangle to ask athletes what they are focusing on prior to performance. On this equilateral triangle there are three factors, one at each tip. At the highest point there is the “Performance Environment” which relates to factors such as the surface, equipment, crowd, teammates etc. At the bottom right tip we have the “Opposition” which is self-explanatory and could be a team or an individual. Most importantly, at the bottom left tip we have “Your Performance” which refers to anything that is under your control such as skills, abilities, thoughts, feelings; it is essentially the pure focus on the task at hand. The higher you score, the more focus you have on that tip. So we are asking about focus, but are providing the context of control to understand whether the athlete is spending time focusing on factors they cannot control (Performance Environment and Opposition) or factors they can control (Your Performance). 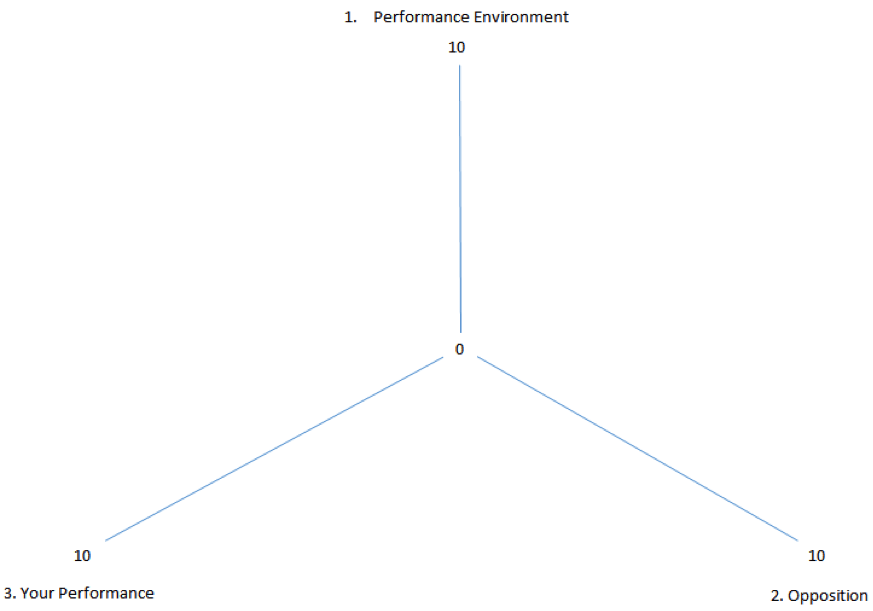 We have to recognize while technically nothing external to us is controllable, it is possible to influence those external factors. Therefore, in the days leading up to performance we expect to see athletes “visiting” all three areas of the triangle. It is necessary for an athlete to spend some time focusing on the opposition to analyze what they are up against. It is acceptable for an athlete to think about the performance environment, how this may impact their performance and how they would want to deal with this. But directly prior to a competition, sitting in the changing rooms ready to perform, it is much more useful to focus on only that which is under your direct control in that moment i.e. your performance (or the processes that will lead to effective performance). At this stage, spending too much time on trying to control other aspects means that you are directing your energy away from the task at hand.

The difference here is between “control” and “influence”. Most (if not all) internal factors (thoughts, behaviors, emotions, decisions) are completely controllable. It may be difficult to control these internal factors at times, but usually they are 100% controllable. External factors are not controllable. You can have a huge influence on them, but ultimately they are not within our grasp. For example, we can influence the opposition with our movement on and off the ball, but we can’t control the opposition’s responses to our actions. We can influence the performance environment by getting the crowd on our side, but we can’t control the crowd or their behavior.

So these uncontrollable factors are important because we can influence them to an extent. Visiting those areas on the triangle should be part of an athlete’s preparation for performance. But when performance looms and its time to switch on to the competition, a laser-like focus should be fixed on the controllables for that performance. Sitting in the changing rooms ready to perform, the athlete should be focused on what they can do in this moment to ensure effective performance. In other words, they should be a “bottom left thinker”, scoring highly on the bottom left tip of The Control Triangle, compared to the other two tips. The athlete should ask “what can I do NOW to perform effectively?” rather than “what have I controlled and what have I not controlled for this performance?” Here is example of a “bottom left thinker’s” profile. 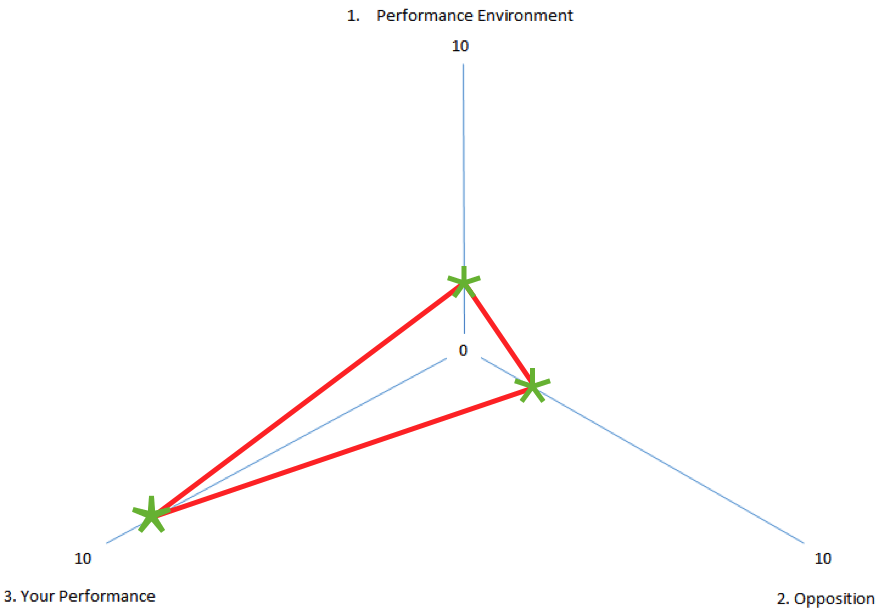 Don’t get me wrong, controlling the controllables is vital as a part of an athlete’s daily routines. They should strive to bring those uncontrollables within their sphere of influence to make sure conditions are optimal for success. But there is a time and a place for this and sitting in the changing rooms directly before performance is not the time to be thinking about anything uncontrollable. The Control Triangle can help athletes to be aware of where their focus is prior to performance, whether that focus is on controllable factors or uncontrollable factors, and how often in the build up to a competition they want to “visit” the uncontrollables. This is also important for coaches and sport science support staff to be aware off, so they can help athletes to redirect their attention to their performance, especially in the face of imminent competition.

Dr. Martin Turner Dr. Martin Turner is a full-time senior lecturer at Staffordshire University in sport and exercise psychology. He set up The Smarter Thinking Project to advance and promote the research and application of Rational Emotive Behavior Therapy (REBT) and Challenge and Threat in performance settings. He is a BPS Chartered and HCPC Registered Sport and Exercise Psychologist, BASES Chartered Sport Scientist, is REBT trained, and is a member of the BPS West Midlands Branch Committee. His expertise is within performance under pressure and adversity. Primarily, his research focusses on the use of REBT in performance settings such as sport, business, and academia. The research applies REBT to sport and exercise and performance settings, investigates the theoretical tenets in the laboratory, and also has developed a valid and reliable self-report measure for irrational beliefs, which are a core part of REBT theory. He has published numerous peer-reviewed articles, book chapters, media outputs (blogs, online articles, interviews) and books, alongside conference presentations and invited talks. Martin is the Lead Psychologist for the FA England Futsal Team.
Previous
Next

The FA’s Four Corner Model can be a useful tool for coaches. But to use it effectively, we need to understand both its purpose and its limitations, and learn how to apply it in a way that supports our coaching without governing our approach. All coaches need guidance on how best to support their players, and the Four Corner Model can provide an excellent framework for session design and player development, provided we use it correctly. Click here to get early access to our brand…

Should We Give Kids Equal Playing Time in Youth Soccer?

Many coaches wonder about the best way to allocate playing time within their team. But when deciding whether to give kids equal playing time in youth soccer, there is no blanket rule. Factors like the environment we’re coaching in, the individual needs of our players, and what we’re trying to achieve as a team will all impact our approach. To establish the best course of action for our team, we should consider the various impacts of how we allocate playing time, as well as how…