When we picture a proactive approach to player development, many people see structure and methodical organisation as a sign of effectiveness. Stuart English, Birmingham City’s Assistant Academy Manager, outlines the importance of allowing players to take initiative and solve problems on their own if they are going to become truly unique and creative on the field.

Chaos is the monster we seek to contain within our structured lives. Chaos is adversity in ordered environments and can be defined in the dictionary as: ‘complete disorder and confusion’.

How then can this be welcomed into our lives, our work and, of course, our training? As coaches we love to see players acknowledging and putting into practice the points we discuss with them during training sessions. We love it when success is achieved and when carefully planned sessions depict an organised and aesthetically pleasing sight. Yet I question whether this should indeed be the ideal outcome. I believe successful player development isn’t simply the successful execution of the coach’s ideas and tactics.

We risk simply creating machines that are programmed to follow and execute instructions and who are devoid of initiative. After all, if and when a player you have coached progresses into the first team or into senior football, will you be by their side to tell them what to do in the game and how to do it?

It all comes down to what type of players you want to develop. Do you want to create risk-takers, problem- solvers and creative minds that will make mistakes but also produce magical moments? Or do you want to create a player who can follow instructions to a tee but potentially fails to adapt without instruction and is fairly limited with their skill-set? I believe that in England we are relatively good at producing the latter but not very good at creating the former. And part of the answer may lie in how we deal with chaos.

The Oxford English Dictionary defines problem solving as: ‘The process of finding solutions to difficult or complex issues’, while creativity is defined as the use of ‘imagination or original ideas to create something; inventiveness’. Chaos arguably creates an arena for these definitions to be played out. In perfect order people struggle to find solutions to complex issues, in other words it’s harder to be creative or original. If you think about the world’s best players, the majority have the ability display both creativity and originality regularly both in training and matches.

The top four players are as follows:

Whilst these four players all play different positions, they exemplify the definitions outlined above: they embody creativity, originality and inventiveness and they are something many players aspire to be.

Consider Philippe Coutinho; a problem solver, a creative mind and a player who has succeeded at top level football but a player who makes a lots of mistakes, takes a lot of risks and gives the ball away an awful lot. Imagine what he would have looked like as an academy player and how his coach would have reacted when he continued to give the ball away. Would the coach perhaps have preferred a more consistent performer who worked hard, tackled hard, always gave 100%? Perhaps someone like Jordan Henderson?

You could argue that both types of player are as important as each other, but we should be able to create players that can do both. Jordan Henderson will match if not supersede Philippe Coutinho for work-rate. Henderson
is physically bigger, stronger and faster than Coutinho but I question if Henderson can solve problems as well as Coutinho can. I would also argue that Henderson is not as creative and unpredictable as Coutinho but he would probably be more capable of following a game plan and sticking to his defensive responsibilities.

One reason for this could be the game of Futsal. The BBC describe Futsal as ‘a small-sided variant of football played between two teams of five players in an indoor arena […] that has been played for decades in countries like Brazil, Argentina, Spain and Italy – countries who have won seven of the previous eight World Cups between them, and are also the top sides in Futsal.’ In England, Henderson has developed within a more structured, coach-led environment from the age of 8 years old (when he joined Sunderland’s academy). In comparison, Coutinho grew up playing Futsal on the streets and in the academy of Vasco de Gama. Futsal has only recently been embraced in the UK. Perhaps this is a result of The FA promoting the game itself and successes that have evolved from Futsal worldwide.

In light of the above, it is ‘no coincidence that the world’s top players are products of a free play environment. Brazil, Argentina and more recently Uruguay are the world’s greatest exporters of professional footballers and the most envied in terms of the richness of talent.’

Cristiano Ronaldo grew up in a similar environment, playing football in the streets every day and night in his village on Madeira. When playing in the streets there are varied surfaces, players of different ages, different amounts of players and usually total freedom to express yourself as much as you would like – in a word, it’s chaos.

Joey Barton, who most recently played for Queen’s Park Rangers in the English Premier League, recently reflected on his early training environment and noted that the importance ‘was on physical strength and playing in a set role within a team.’ The ‘individualistic, creative and impromptu elements of football were not emphasised as seen in Futsal’. Barton praises Brazilian academies for integrating Futsal into young player development, as it encourages a greater degree of expression on the ball and improvisation.

‘Within Brazilian Futsal academies, Futsal is part of what distinguishes the lead style of coaching, where over-coaching the next generation is an inbuilt fear. Although players participate in Futsal three times a week between the ages of 7 to 12, players are not solidified in permanent positions until they reach the age of 14. Talent is allowed to breathe, to find its natural path in games such as Futsal.’

Futsal allows players to ‘trust in their own ability’ and to understand how their skills can benefit the team, rather than being taught how to reign in individuality and expression in favour of sticking to tactical discipline and a pre-defined team ethic.

It is our job as coaches to make sure we recreate those fun, player-led environments and allow players to use initiative and be creative. Peter Gray, a research professor at the Department of Psychology, Boston College, notes that: ‘learning, creativity and problem- solving are facilitated by anything that promotes a playful state of mind, and they are inhibited by evaluation, expectation of rewards, or anything else that destroys a playful state of mind.’ Coaches need to ‘stimulate the imagination so success is achieved when the child finds passion and excitement in what he’s doing.’

As a personal example from my time at Brentford Football Club, we regularly allowed players a period of time to engage in self-directed learning. This means they would choose an aspect of their game to work on, they’d go away on their own, in pairs or groups and work with only a coach there as a resource should they want advice or help setting themselves up. This ranged from 2-3 minutes within a session or 30 minutes before a session. We strongly encouraged players to do this as it is unstructured and gives them the opportunity to play whilst at training.

It’s clear then that we need to let go of order, embrace chaos and allow for mistakes. This means practices may look messy, there may not be much or any consistency; however, your players will have to solve problems themselves. I believe this is the important point. As a coach it means you will need to watch as the players attempt to solve the problems they face and watch them fail at times.

Good coaching is allowing the player to fail and not giving them the answer to solve
the problem, which instead enables them to learn.

Good coaching is allowing the player to fail and not giving them the answer to solve the problem, which instead enables them to learn. This is going to make the player think and find ways to solve the problem themselves. Our job is to then pose questions and talk with the players to help provoke ideas, but only when required. If the player solves the problem our job is to then give them another challenge to put them under further pressure and push them again. We must remember the age-old mantra that we learn most of all from mistakes. Although order is suitable for some areas of our lives, if we want to produce greatness we need a little chaos along the way. 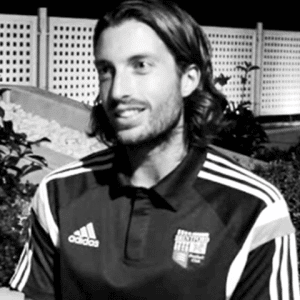 Stuart English Stuart English is the Assistant Academy Manager at Birmingham City Academy. Stuart has over a decade of experience in player development and has also worked as Head of Coaching at Brentford FC.
Previous
Next