PDP Lead Researcher, James Vaughan examines the influence of corporations on football. Highlighting the danger of economic incentives he looks at how Leicester City’s story could be catalyst for a revolution in the global football story.

Where do you think future of the game (football) is going?

Question posed by Eduardo Rubio  (Head of Academy Coach Development at MK Dons, England) at a panel discussion entitled “Building a learning culture in a football club” at the 2016 AIPAF: III International congress of Applied Psychology in Football.

“I think we need to understand both macro factors and micro factors, society and economy are changing and we need to be aware of all of this.”

This blog focuses on where football has been and where we (at PDP) hope it’s going. Specifically we’ll explore the symptoms of a key macro-factor highlighted by Ruben Jongkind at the NextGen Talks last month: Economic incentive.

The ever-increasing economic incentive in football has attracted the attention of the world’s corporate greed. This has led to the commoditisation of clubs, players, fans, the games very identity and history. An example is what Dunkin Donuts did to the Liverpool FC crest last season: 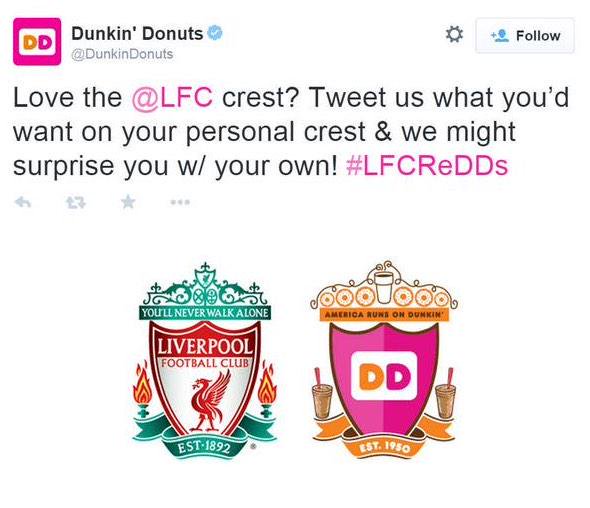 While the debate over the Hillsborough disaster continued in courts, Dunkin Donuts were replacing the eternal flames (an everlasting memorial for the 96 fans that died) with coffee cups!

Even before this disgraceful marketing ploy, I hated Dunkin Donuts. I hate that they have a presence in sport, let alone football, and I hate that they continue to have a partnership with Liverpool Football Club, I also hate their product and what it can do to people. In 2011 I stopped eating processed foods, initially as part of injury-rehabilitation, but after learning about the dangers of processed (sugar laden) foods I stopped permanently.

I couldn’t comprehend why a football club would associate itself with a brand so synonymous with an obesity epidemic that’s killing adults and creating a generation of diabetic children. But then I consider Ruben’s answer to the initial question posed to him – the key macro factor dominating football and player development: economic incentive.

Where Football Has Been

Economic incentive is the reason for the mass of international investment in our game and our clubs bottom line has come to dictate boardroom success. All the while more transfer money and higher wages have been buying success on the pitch. This makes money the trump card, suggesting a cycle whereby more money brings more success – at any cost including fan health, club identity, and player loyalty. However Leicester’s success shows that money doesn’t have to be the dominant factor for success: The story of Leicester City could break this cycle.

The real problem with the world’s economic incentive obsession is the story it spreads. This is a story whereby; anything goes as long as it’s good for profits – greed is good.

This story has created companies like Dunkin Donuts who have their own story – something like this – football, fan health or peoples’ quality of life are not as important as making money. Therefore we will sell our obesity nurturing product until people are too sick to consume it anymore.

So what does a partnership like this say about Liverpool Football Club? What does it say about the value the club places on its fans’ health compared to the need it has for money? The point is that Leicester City have succeeded spending far less then the big clubs, so no club needs money as much as they think they do, no club needs to sell their soul or their fans to fund success. The story of ‘what brings success’ needs to change, while corporate deals bring money they can be morally corrosive.

The Power of Story

Professor Dave Snowdon (in this lecture) tells us that narratives (our stories) have a greater influence on human social systems – cultures, clubs, organisations, schools, government etc. – than the people within these systems. Another way of thinking about it is that stories have greater agency than people. So while coaches are important in nurturing learning environments, the stories – macro factors – surrounding your session and our game have an even greater influence.

We need to collectively change the story surrounding our game to create better environments for our players.

This is why mainstream media and advertising are so debilitating for (human and)player development – they reinforce stories of money, fame, ego and greed. These stories shape ideas of success, inspire conformity and crush creativity, but they also shape the wider world in very tangible ways. Check out this 3-minute summary on the media influence on the current American primary elections, a great example of their controlling influence on our stories.

Professor Snowden suggests that some anthropologists are moving away from term Homo-Sapiens and towards Homo-Narrans. Homo-Narrans because narrative may be the defining feature of human intelligence, a point reinforced in the must read book Sapiens – a brief history of humankind, written by professor Yuval Noah Harari:

“Myths (stories and narratives), as it transpired, are stronger than anyone could have imagined…While human evolution was crawling along at its usual snails pace, the human imagination was building astounding networks of mass cooperation…All these cooperation networks – from the cities of ancient Mesopotamia to the Qin and Roman empires – were ‘imagined orders’. The social norms that sustained them were based neither on ingrained instincts nor on personal acquaintance, but rather on belief in shared myths (Harari, 2014).”

In an era when money shapes the worlds dominate story of success, Leicester City provide another story and a platform for change, or as Claudio Ranieri put it:

“In an era where money counts for everything, I think we give everybody hope.” Claudio Ranieri

Where Football is Going…We Decide.

Leicester City’s 2015/16 victorious season can be the catalyst for change, but only if we celebrate a new story of success. One where money is not the defining characteristic of success but the character of Leicester City’s players is: Jamie Vardy, Riyad Mahrez and Wes Morgan spent years in the lower leagues, theirs are stories are of perseverance, effort and love of the game, not financial greed or elite entitlement.

When we consider stories as macro factors perhaps we must also consider the unique story and set of personal values Leicester City’s owners bring to professional football. The Srivaddhanaprabha’s are Buddhist, and I found this quote about the Leicester City owners:

“Some people in our sport get very wound-up and over-excited, whereas they are the sort who, win or lose, will say, ‘Wasn’t that fun?’ They seem much more philosophical than others. ‘Whether that comes from their religion I don’t know.”

While providing free beer for fans may not promote ‘healthy living’, these owners seems to have a novel approach and a different mindset. Yes they are wealthy, yes they are part of the capitalist system (and a very successful part), but they seem to have a more balanced mindset, potentially making them and the club environment less evaluative and more autonomy supportive.

According to professor Yuval Noah Harari, the Buddhist belief system de-values wealth and power. A key belief being that no matter what people achieve – wealth, status, power, knowledge – they are rarely content because discontent comes from the behavioural patterns of our mind. Which (according to professor Snowdon) come from the stories we grow up with and the stories we continue to tell. This is why current neo-capitalist story of economic incentive and profit motive told by media and advertising is so damaging for us. This story shapes the very core of our identity (McAdams & Olson, 2010) shaping the way we live and ultimately the way we play football.

Leicester City F.C have proved that more money is not the means to success. In fact Manchester United, Manchester City, Chelsea and most of the Premier League have proven that too. My research and understanding of motivational and psycho-social literature would suggest that corporate deals like the Dunkin Donuts ones are so morally corrosive that they create controlling environments that make it almost impossible for players and coaches to reach their potential.

The DD/LFC deal shows how important money is to the club, so how can we (the fans) be surprised when Raheem Sterling exercises these same values and moves to Manchester City based on economic incentive?

The stories surrounding football are toxic for everyone involved; they come from a story based on the profit motive, which too often puts ego, greed and money above all else.

We change footballs story of ego, greed and money by telling a new story. We share the story of Leicester City.