Messi, Robben, Ronaldo, Sterling, Iniesta – these players, and many others, all have something in common. Not how much they’re paid, their on-field creativity, or their level of fame – it’s a key physical attribute of their game. Small steps. Running and movement expert, John Marsh examines natural running and what makes this so devastating on the football pitch.

Over recent years there has been a large movement in endurance running circles called ‘natural running’ or ‘barefoot running’. It’s unclear from where this sudden trend emerged, but books such as Christopher McDougal’s Born To Run, as well as sporadic (and sometimes information-sparse) articles in leading running magazines, certainly helped. Arguably, the awareness of barefoot running has grown in concert with the now reasonably widespread whole food movement – it seems many are looking to return to a more natural way of life, from their food choices through to their running shoes.

But what are the potential benefits of barefoot running, and how can aspects of this be used for both general training and aerobic conditioning, or on the football field? We’ll try to answer these questions, and then take a brief look at how applying some of the same principles to your football training could potentially affect everything from your resilience against injury to your ball skills.

Mechanics of running and the benefits of going natural

When we consider the act of running, our main goal is to get from point A to point B, some distance away, in less time than we could if we were to walk. This sounds trivial, but the implications of this are quite important. The main goal, then, is forward motion. If we take this a step further, and look at either long distance running or the amount of running that takes place over the course of a football match, we not only want to get to point B quickly, but we want to get there efficiently. If we’re able to be a little bit less fatigued when we get to our end point, or a little less fatigued half way through a match because we’ve been running in a more efficient way, then we’re ahead of the curve.

When we run, in our efforts to move forward it’s only natural that we also move up and down to some extent. This is called vertical oscillation, and although this is essential and a natural part of the gait (cycle), it’s also where we typically use most of our energy. The idea of barefoot running, at its most basic level, involves literally removing the shoes (and all that padding in them) before heading out for a jog. A couple of game-changing things happen when we take these things off.

Firstly, we lose our cushioning. This means that we’re forced into a more mid-foot strike when we start to run. We can’t afford to land on, or even near, our heel without the shoes on, as this would send shockwaves up our legs and be way too much impact. The cushioning now comes from our own natural cushioning system, including our plantar fascia (in the arch of the foot), Achilles tendon and calf. Although we’re designed to be able to do this very efficiently, this ‘shock absorbing’ system becomes trained out of many runners or athletes after they use cushioned shoes for many years. This is why people can get a shock when starting to run barefoot, as their musculature adapts.

Messi’s most genial quality is the number of times he touches the ball in the space of 1-2 meters. He can change direction I don’t know how many times. Where you do 1 or 2 steps, he touches it four times.

Secondly, because we’re landing on the mid-forefoot, something else has to happen: the foot lands under the hips, not out in front (known as overstraining). This is often referred to as a ‘shortening’ of the stride. We have to get used to this quicker foot turnover, or cadence, as we don’t have as long in-between steps. This has another affect: when the foot was landing out in front of the body, the reactive force was in the opposite direction to which we were travelling. That’s right, when you over-stride you’re effectively ‘braking’ yourself, or slowing yourself down. So, by shortening the stride and having the foot land under the hips, we start to reduce our vertical oscillation and use our natural shock absorption system. We’re beginning to run naturally.

The result is that when these changes are made to the running style, one can both reduce the impact associated with each stride (through less vertical oscillation) and start to conserve energy through a more efficient gait pattern. If you analyse the podium finishers at any marathon running event as they cross the line, you’ll notice that, above all else, they were able to maintain their composure, or efficient running form, the longest. For all distances of running, efficiency is extremely important – and at times far more so than fitness.

So, barefoot running is in theory more efficient due to the fact that we’re able to reduce our energy expenditure. But are we able to maintain this with shoes on? The answer is yes, and no. If you’re looking to incorporate this new, more natural gait pattern into your running, you need to ensure that the shoes you wear have a low pitch (height difference of the cushioning in the heel, relative to under the forefoot). So, if you choose a shoe with ‘zero’, or a low pitch, then you’ll still feel the benefits of a more natural running gait.

There are two main drivers that suggest exploring the barefoot running approach could be helpful to a player on the football field: reduction in overall energy expenditure and reduced average distance from the player’s foot to the ball when in possession of the ball in a dynamic setting (e.g. running or dribbling).

If we’re able to improve our running through less vertical oscillation and a more efficient stride for just a few steps, then in theory over the course of a whole game we should start to notice significant improvements. These would be seen as an increased ‘perceived’ level of fitness (perceived in that really the aerobic capacity of the player has remained unchanged, but their work output to cover the same distance has just reduced) and less muscle soreness in the quadriceps region (with possible more initial soreness in the calf/Achilles area until the body adapts). When applied to a whole team, then, regular barefoot training or running means less vertical oscillation, impact and energy wastage across the board. This means a more proficient and robust team in the later stages of the game.

Through shortening the stride and increasing the cadence our average distance to the ball (when dribbling) at any one time decreases – we take smaller touches and have greater ball control. With a longer stride, we need to take longer touches, tapping the ball slightly further ahead to allow more time for our legs to catch up before we can make contact again, as the ball and player both move forward. A shorter stride means that we have quicker reactions, we are able avoid defenders, pass or shoot sooner because we have the same forward velocity (overall running speed) as the ball, we don’t have to reach or stretch: think of Messi dribbling . This not only increases opportunities and quicken reactions during game play, but also reduces risk, as the player remains in control of the ball and is more dextrous and less likely to lose the ball to the opposition.

How to train to go natural

It is important when embarking on the barefoot running journey that you start out slowly. Focus on a few minutes simply jogging barefoot before any major training session. Try to appreciate the new ‘feel’ you have for the ground, and feel where along the foot you’re making contact with the ground. From here, experiment on different surfaces: grass, dirt and even concrete for short periods. As your musculature adapts to the new technique, slowly increase the amount of time you spend running barefoot.

When applied to the whole team… regular barefoot training or running means less vertical oscillation, impact and energy wastage across the board.

Once comfortable with a few drills, slowly switch all of your training shoes and even casual shoes over to a zero or low pitch option. Look for 4mm or less as a rough guideline for acceptable pitch.

If you experience muscle tightness early on, be sure to use stretching and self-massage techniques to help relieve the tension in the lower legs. The key areas will be plantar fascia (bottom of the foot) and the calves. As this strengthens, you will have the capacity to run further, faster and with less effort than ever before. 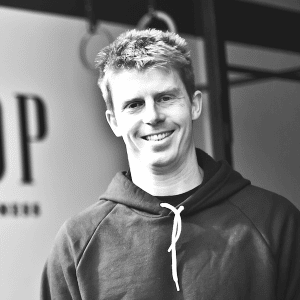 John Marsh John is a strength and conditioning coach and has also worked extensively with endurance athletes. He works both as a coach of our group classes, as well as a one-on-one trainer. He has experience in corrective exercise training as well as athletic performance coaching. John has competed at an elite level in distance running, adventure racing and triathlon. His results include a top-ten category finish at the Hawaiian Ironman triathlon World Championships in 2009. Since then, his focus has been on a holistic approach to strength and conditioning, health and wellness. John's passion is helping clients become strong, balanced and centered in their being to then be able to live their life fully and with passion.
Previous
Next

PDP Video Session Plans are adaptable sessions designed by academy coach, Dave Wright. All sessions show key focus points, set up, and progressions so you can use them in your next practice.