Rondos are a popular possession-based practice favored by many of the world’s best coaches. They allow players to experience being underloaded and overloaded, incorporate elements of positional play, and provide opportunities to coach tactical elements of the game. But when is it appropriate to use rondos while working with young players? Below, we look at both the benefits and the drawbacks of rondos, and consider the best time to utilize them while coaching youth soccer.

A rondo is a small-sided game where there is a focus on overloading one team in a possession-based practice. A group of players are tasked with keeping possession of the ball while completing a series of passes, while a smaller group of players (sometimes even a single player) tries to take possession.

Why are Rondos Used in Soccer?

Rondos follow the overload principle: fitness improves only when workloads are greater than those normally encountered. Even though this is not the primary goal, employing overloading in your training session exposes players to quick thinking and playing under fatigue which are two great ways to simulate game-day scenarios. Rondos are also a great pre-game warm up to keep players alert and bring their heart rates up before kick-off.

It normally begins with a 3v1 passing practice, progressing to 4v2s, 5v2s, and beyond, becoming more of a positional game as the space and number of players increases. “The largest example might be a 6v6 + 5,” says PDP Co-Founder Dave Wright. “And this can be realistic in terms of the game, because it becomes an 11v5 practice for the team in possession.

“I fundamentally believe in the value of positional games. You can start teaching tactical and positional elements of the game, and things like receiving between lines and receiving to face forward; these are the kinds of good habits that we want young players to have.”

What are the Benefits of Rondos?

Rondos are great for providing repetition of specific skills. “There’s lots of sharp, quick passing, one- and two-touch, receiving across your body, and so on,” explains Wright. “We may sacrifice some realism, but the players get lots of repetition of receiving and releasing the ball in tight spaces, under pressure, and with good body shape.”

“Another advantage is that players need to use both feet,” says Dan Wright, Technical Advisor at PDP. “You need the basic skills of receiving on your non-dominant foot and then being able to pass it 4-5 yards. You may be able to avoid doing that in other practices or in games.”

Rondos can also make excellent arrival activities. “It’s very easy to mark a couple of boxes out and make the first four kids a 3v1, then mix it up as more kids arrive,” suggests Dave Wright. “The players are straight on the ball and they’re getting repetition and touches while you’re setting up.”

“It’s a bit of fun, they know how it works, and it’s something they can lead and drive themselves. As an arrival activity, it’s great.”

But there will be times when alternative activities might be preferable. “With younger players, I’d probably prioritize other things,” says Dan Wright. “Telling a 7-year-old to pass might be robbing them of opportunities on the ball.”

Some coaches also believe that rondos don’t always realistically reflect the game. For instance, in a 4v2, you might have a goalkeeper, two wide players, and a ten; “it’s great for goalkeepers,” explains Wright. “If you put a goalkeeper at the back of that box, they’re practicing playing out to two center-backs or through to that player behind the press. But none of those roles replicate a central-midfielder. It won’t give them repetition of receiving through 360-degrees and scanning their surroundings.”

“So you’ve got to think about which individuals you have in your practice and what they’re going to experience, and whether there are alternative activities that are more representative of what they’ll see on gameday.”

“It’s good to watch your players on gameday and consider the distances that they’re passing the ball,” adds Wright. “Even in smaller-sided games, there can be lots of occasions when players pass the ball over 10 yards. But spending too much time in a rondo might limit your players’ technical ability to pass the ball further — or, perhaps more importantly, their vision or awareness, because they’re only playing in this little box.”

Ultimately, our role is to use a range of different activities to give the kids a variety of experiences. “On the other hand, if you constantly played in the 7v7 space, the players might not get enough repetition of passing and receiving, or of being under pressure,” concludes Wright. “It’s about appreciating that some practices will be good for certain things and some will be good for others. Consider your intentions and pick your practice. And then, when you reflect on that session, ask yourself if it got the outcomes that you wanted.” 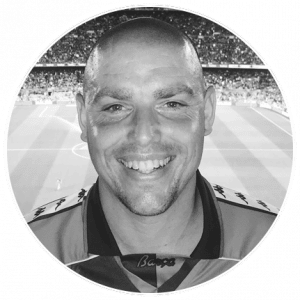 Dan Wright Dan Wright holds the UEFA A license and FA Advanced Youth Award. He is Technical Advisor at PDP and an Academy Coach currently working in England.
Previous
Next

In this Player Development Project webinar replay, we continue our series of discussions around position specific work and how you can create sessions to support their development across a variety of roles. This time, we focus on how coaches can support young players develop defensive skills and problem solving ability. PDP Co-Founder, Dave Wright hosts PDP Technical Advisor, Dan Wright & Leicester City FC Academy Coach, Mark Lyons for an interactive discussion with a defensive focus. Our panel of UEFA A licensed expert coaches present…