Talent: a dangerous word for players and a highly infectious idea for coaches. This article by PDP Lead Researcher, James Vaughan explores the possibility that talent is a ‘meme’.

Evolutionary biologist Richard Dawkins coined the term meme to explain an infectious idea that spreads from person to person: the cultural equivalent of a gene. Incorporating theories from motor learning and psychology, this article discusses talent as a meme and highlights its potential influence as a socio-cultural constraint – inhibiting the development of skill and creativity. However, we start with the idea that talent (as we know it) may not exist at all.

“Within the framework of nonlinear pedagogy, a skill and more generally talent, is not a trait possessed by individuals alone but a property of the athlete-environment system subject to changing constraints”

This is key: players do not possess talent, and people are not skilled. In some moments, within certain environments, under specific constraints and when engaged in a particular task, skill and creativity will emerge. Elizabeth Gilbert illustrates this point in her TED talk: your elusive creative genius.

As a simple example, if you put Messi on the pitch at the Camp Nou surrounded by his Barcelona teammates playing their iconic brand of football it becomes plain to see that he’s the most skilful (talented) player on the pitch.

But would he stand out as much on a boggy pitch playing for a Sunday pub league team? Probably not: because the environment surrounding him may constrain and or limit his play. Consider the impact of:

These environmental constraints could mean that Messi may not be the most effective player on the pitch and not even the most skilful or ‘talented’.

“A skill and more generally talent, is not a trait possessed by individuals alone but a property of the athlete-environment system subject to changing constraints”

This recognition is turning the attention of researchers away from the individual player and towards the environment. It is also illuminating the importance of socio-cultural constraints. Novel studies are paving the way to first understand and then be able to change social circumstances, creating cultures that aid players’ skill acquisition and creative development. 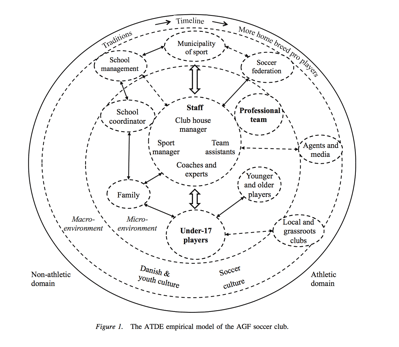 In 2010 a portrait of a professional football clubs (AFG in Denmark) Athletic Talent Development Environment (ATDE) was created (above). It is defined as:

. . . a dynamic system comprising (a) an athlete’s immediate surroundings at the micro level where athletic and personal development take place, (b) the interrelations between these surroundings, (c) at the macro level, the larger context in which these surroundings are embedded, and (d) the organisational culture of the sports club or team, which is an integrative factor of the ATDE’s effectiveness in helping young talented athletes to develop in senior elite athletes. (Heneriksen, Stambulova, & Roessler, 2010, p. 160)

“The idea that ‘natural talent’ is required to succeed is dominant within western society, shaping peoples mindsets and motivation it has become a socio-cultural constraint limiting skill and creative development.”

Talent is treacherous because it creates unrealistic expectations and shapes belief systems built on social comparison. When a player is told they are talented it usually follows some type of ‘success’, but too often ‘success’ is only defined by social comparison: scorelines, league tables, individual rankings, goals scored (sometimes assists) and other subjective albeit comparative feedback – often from coaches, parents and peers. Too often good performance is attributed to ‘natural talent’, and a belief in ‘natural talent’ breeds an entity mindset. A ‘natural talent’ mindset rejects challenge, effort and perseverance, cultivating a belief in genetic endowment. The belief in natural talent directly opposes the formation of a growth mindset – commonly accepted as essential to long-term development.

Generally we have been unwilling to accept and explore the formation of our psychology. This is changing; the work of Carol Dweck has led to the recognition of growth and entity mindsets. In fact, most of this research centres on the consequences of using words like ‘talent’ compared with words like ‘effort’.

“Generally we have been unwilling to accept and explore the formation of our psychology.”

You may think I’m over reacting but every time ‘natural talent’ is mentioned it may create and or add to a psychological snowball building in our minds. Inches at the beginning of the journey become miles of uncontrollable carnage at its end – it is far easier to stop the avalanche before it gets going. We need to recognise how much culture and social relations impact player development; any conversation could be a fork in the road, every mention of talent adding critical mass to a potentially devastating psychological snowball – a mindset that limits effort, crushes creativity and monopolises identity.

Dawkins, Memes and a Silent Agenda

The concept of memes and memetics – the science that studies the replication, spread and evolution of memes – may help us understand how ideas (including socio-cultural constraints) spread their silent agenda within sporting systems and build psychological snowballs in our minds. The term ‘meme’ was created by renowned evolutionary biologist Richard Dawkins and describes the cultural equivalent of a gene. Memes are ideas that replicate: they are spread by one person copying another, and everyday cultural practises such as dieting, fashion, dancing, ceremonies and social rituals – of which sport and football are examples – can be considered memes (Tinning, 2012). In providing support for this perspective, Heylighen & Chielens (2009) liken memes and cultural traits to genes or viruses – transmitted from person to person. Indeed, it’s believed that cultural evolution may mirror biological evolution with the same basic mechanisms of reproduction, variation and natural selection determining cultural evolution. In football, meme variation may account for the distinct playing styles evident around the world. Using Tinning’s (2012) explanation of memes (below) it becomes easier to picture them as socio-cultural constraints, infecting people’s minds and controlling their thinking.

“The point is that some messages and ideas –memes, like talent– spread like wildfire, infecting the minds of our young players, creating psychological snowballs destined to create carnage.”

Memes differ in their degree of ‘fitness’, i.e. adaptedness to the socio-cultural environment in which they propagate. ‘Fitter’ memes will be more successful in being communicated, ‘infecting’ more individuals and thus spreading over a larger population. This biological analogy allows us to apply Darwinian concepts and theories to model cultural evolution. In any given cultural context there are many competing memes. Some memes are more reinforcing for their ‘hosts’ (people) and they gain a competitive edge.

At any particular moment football has competing and trending memes: we could think of tactics, styles and ideologies as memes as well. For example, consider the spread and adoption of possession football, a high press and fast transition. Furthermore, football itself may be conceptualised as a meme: a global flow of ideas (Tinning, 2012). With universally accepted rules (spread by colonialism and globalisation) football has been embodied by, and reinforces, unique social practises. When football is infused with the movement opportunities (affordances) found in unique social practises, distinct cultural interpretations of football or playing styles emerge. For example, at a cultural level the combination of samba, capoeira and malandgrem (socio-cultural constraints) in Brazil (explained in catch me if you can) led to the emergence of the beautiful game. And at a personal level Zlatan Ibrahimovic’s taekwondo background has evidently influenced his passing and the overall movement opportunities / affordances he perceives – leading to his creative style of play.

Some cultures and backgrounds contain messages and ideas – memes, like talent – which spread like wildfire, infecting the minds of our young players, creating psychological snowballs destined to create carnage. Memes like ‘talent’ have the potential to limit feelings of autonomy, define competence through social comparison, and create deep division between teammates. Memes like this are indeed socio-cultural constraints; they control players’ motivation, disengage their brains and lead to the conformity that kills creativity and limits skill acquisition.

Research suggests natural talent is dying and the very idea has become a harmful meme. We can stop the spread of this harmful socio-cultural constraint by ensuring its extinction. Let’s remove talent from our coaching and our culture.

Should girls be able to play on boys’ teams? The positives and potential pitfalls for girls in mixed soccer

PDP Co-Founder Dave Wright & Former New Zealand Women’s Head Coach Tony Readings, discussing the positives and potential pitfalls for girls in mixed soccer. Is it better for female soccer players to play in boys’ teams? Playing mixed soccer can provide both technical benefits and social challenges. As coaches, we must strike a balance that pushes our players without hindering their development or enjoyment of the game. Whether it’s best for a girl to play on boys’ teams depends upon a variety of factors that…