Steve Kerr knows about basketball. He is a seven-time NBA champion, winning three with the Chicago Bulls and two with the San Antonio Spurs as a player, and a further two titles with the Golden State Warriors as head coach. Kerr’s depth of knowledge is obvious and unquestionable, but as coaches what can we learn from his coaching interactions and approaches?

Let’s start off by watching a video featuring Steve Kerr. In this clip, Kerr is sharing some live statistical data with star player Steph Curry.

You might have to watch a few times to see all the genius of this one moment, but here is what I see:

Kerr is addressing the athlete on his own, away from his peers; although the messages might help the team (collective), they are specifically chosen for Curry (individual). The coach is making time to share a personal message with the individual, not just a generic team talk or tactic. What must this feel like to be coached in this way? Presumably: “The coach cares about me so much he finds time to talk, just to me, one-to-one in the heat of the game.”

What relationship must the coach have with his athlete to interact like this? I would suggest it is developed over numerous interactions in training, informal chats, video sessions and games. It can’t be turned on just for game day, and it certainly isn’t just for the cameras.

I’m reminded of an intriguing story shared in our recent Masterclass discussion with Paul McGuiness about Sir Bobby Charlton’s journey.  As a younger player at Manchester United, Charlton felt that his youth coach Jim Murphy was so invested in his personal development that it felt like he had his own “personal coach”.

Focus on the Process

This is a common theme we’ve discussed here at PDP: focusing on the process which drives the performance and ultimately controls the outcome. In the video, Kerr shows Curry two different set of statistics: his shooting totals and his plus-minus (how many points better the Warriors are when Curry is in the game versus when he is not; in effect, his overall impact on the team’s performance.) Kerr recognises that Curry is disappointed with his shooting conversion, but he recognises that there is more to his game than *just* shooting. As he says,  “…it’s not always tied together, you’re doing great stuff out there. The tempo is so different when you are out there, everything you generate for us is so positive, it shows up here, not always there.”

Curry is one of the Superstars of the NBA, shouldn’t the coach be pushing this elite player and demanding an improved performance? Shouldn’t he just make all of these shots? Won’t the team lose if he doesn’t?! Apparently not. The message here is almost: forget about that stuff (outcome) the small things you are doing to help the team (process) are great and working.  This shifts the athlete’s attention towards thinking: “I can have a great game without sinking every shot” and allows the player to tune in to different aspects of the game.

Coach From a Positive

Although Curry might be frustrated and disappointed, Kerr doesn’t mention the shots he’s missed, he only focuses on the positives.  The key last message “You are doing great! Carry on my son!”.  What would this feel like for the player as he returns to the court? What is the last message you send to your players?  How does that make them feel?

‘Ownership’ has become a bit of a buzzword in coaching; it has certainly been encouraged via modern coach education.  It is now commonplace to see player-led warm-ups, leadership groups and teammates discussing targets and objectives.  All of these have a place and are great for developing social interactions and leadership qualities in young players, but what are the real aims of Kerr’s actions in this instance?  They are not just for show.

Kerr tells us that this strategy was thought out and shared with the players pre-game: “I told them the other night after the last game that we were gonna do it.”  This means it wasn’t suddenly dropped on the players, it probably isn’t new and from the number of interactions and speakers, it would be fair to suggest this is an approach the Warriors use in practice every day.  When quizzed about their details and quality of their talks, he replies: “I don’t know, I wasn’t listening”.  This is crucial.  We can’t stand over players every time they voice an opinion or make a decision if we want them to feel autonomy and competence. That kills these moments and isn’t really allowing ownership to emerge.

As the journalist pushes for more details, he asks about Kerr’s approach to picking the leader. He replies: “I didn’t choose at all…it happened organically.”  This helps to establish the principle that everybody has a voice, everyone’s opinion is important and anyone can lead.

It’s their team…it’s not your team

This is a concept we’ve pushed a lot at Player Development Project, that perhaps the idea of coaching and leading a team links into the coach’s ego.  In reality, players play the game, we just help. As Kerr puts it: “As coaches, our job is to nudge them in the right direction, but we don’t control them. They determine their own fate.”

Do you know why you coach?

Perhaps more importantly, do you know why you coach the way you coach?

Kerr candidly states: “I have not reached them for the last month, they are tired of my voice. I’m tired of my voice.”  With practice after practice and game after game, the schedule and routine of professional sport can become monotonous…and even ruin the fun of the game. This may appear unusual but can happen even in high performing teams like the Warriors.

We’ve touched on motivation and Self Determination Theory (SDT) before, and I think there are some real-life examples in Kerr’s actions.  To quickly recap, SDT is a meta-theory that provides a framework for the study of motivation, development and well-being (Deci & Ryan, 2002, 2011).  The theory suggests that we have 3 basic psychological needs:

So why is this important, I hear you ask?

In learning environments where these psychological needs are met, adaptive self-determind motives emerge; where they are not met individuals become frustrated and maladaptive motives, behaviours and movement patterns emerge.

It could be suggested that Kerr is tapping into peer-to-peer learning (relatedness) and believes the answers lie within the group. It could be an acknowledgement that the coach doesn’t always have all the answers or that the player sees things the coach might not. In fact, the coach’s voice might even limit (constrain) the opportunities for action (affordances). This ‘hands-off’ approach may allow the players to find new or novel solutions that we might not have offered by the coach in the same context. Finally, it is important to reflect that the players are competent to perform this huddle, they are not being asked to do something they can’t.

What is the balance of your conversations and interactions with your players?

How often do the players share and you listen?

Do you allow or design time for players to connect and collaborate without the coach helicoptering in?

Kerr is encouraging his team to connect and find their own solutions to the problems that emerge from this game.  This self-organisation between players allows them to adapt to the demands of the game in front of them, finding innovative solutions and ultimately become more skilful.

“This is their team, it’s up to them to communicate and focus and lock in and play together and compete and they did a great job of it tonight, so they all get an ‘A’.”=

Would you like to enhance your skills as a coach?

Our online soccer coaching courses are designed and taught by some of the world’s best youth coaches and coach educators. Our team will guide you, step-by-step through real coaching scenarios, whether you’re a seasoned coach or you’re brand new to the game. 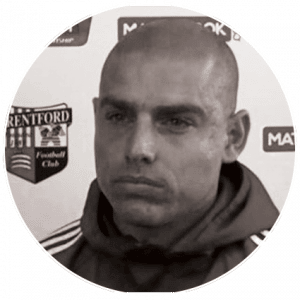 Determined to Succeed: An Interview with Liam Ridgewell

Liam Ridgewell enjoyed a 17-year career as a professional footballer. After making his senior debut for Aston Villa, he went on to play over 300 games in English football before joining MLS side Portland Timbers, where he is now a coach. Below, Ridgewell reflects on his experiences in youth football, the challenges of making it to the Premier League, and the mentality required to compete at the highest level. In This Article Developing a Strong Mindset Competing against Elite Opposition The Importance of Overcoming Adversity…