What are affordances? PDP contributor and associate lecturer at Oxford Brookes University, Ben Franks shares his work on affordances, what the term means and examples to bring the concept to life.

Affordance is a new ‘in vogue’ term, and appears to be replacing the Constraints-Led Approach (CLA) as the modern evolving coaching methodology. Similarly to the nature of a CLA, affordances exist – they are properties of the environment that are ‘real’, emerging and decaying naturally. By definition, an affordance is the key origin of ecological psychology and was originally defined by James Gibson in the late 1970s. Affordances are fundamental relational properties of the environment – they imply the complementarity between the animal and its environment (Gibson, 1979; Shaw and Turvey, 1981; Fajen, Bailey and Turvey, 2009). From Gibson’s analysis, affordances exist in the environment. The properties and boundaries that govern the affordance are always present, yet when a human acts upon that landscape their disposition to that affordance defines whether it can be acted upon. Gibson interestingly used the term ‘-able’ to characterise the properties of affordances, namely their ability to be, for example ‘catch-able’, ‘climb-able’, or ‘throw-able’. Through this language, it encapsulates the mutual dependency of the perceiver and their relationship with the perceptual field. They are in fact, relational.

An often missed yet key property of an affordance is its dispositional nature. To borrow a useful example used by Vanda Correia at the Sheffield Hallam Symposium: picture a wall with three doors, two of which are closed and one of which open. The most obvious answer to get to the other side of the wall would be to go through the open door as it affords the ability to enter it. Yet if we remember that actability of an affordance is mutually relational to the perceiver, their own boundary conditions affect the use of said affordance. The size of the perceiver may not allow passing through the door to be an opportunity to engage with said affordance, making the affordance unattractive to the performer’s needs.

Affordances, thus, are governed by control parameters informed by the constraints imposed by the environment, and their relational position towards the skills available in that given task. Whilst a ball is throw-able, it is governed by the laws of gravity to inform another perceiver that this ball is also fall-able and and may not be catch-able due to the size of the perceiver. They are dispositional relative to the organism and its task (Chemero, 2003; Wilson, et al., 2016). This behavioural discrimination echoes to the fact that affordances exist, and that they are directed by lawful properties to which actions occur, yet remain goal directed (Zhu and Bingham, 2010).

Referring back to the Sheffield Hallam Coaching team games symposium, Danny Newcombe introduced ‘Affordance Driven’ as an alternative coaching methodology that appreciates the role of behavioural opportunity, opposed to that of the constraining boundary parameters. I’ve been fortunate enough to have Danny as an advisor and more recently as a colleague at Oxford Brookes, which has given me a huge step into understanding the complex nature of affordances and their application to coaching and research.

‘Affordance Driven’ refers to the design of practices that involves the manipulation of task constraints for the purpose of soliciting affordances for players to act upon. All behaviour is deterministic and goal directed, so affordances must be relational to solving the task at hand. If I want my players to move the ball forward as often as possible, then a number of opportunities for the ball being played forward must be provided. What is key though, is that the desired affordance is not made to be the only available opportunity – the forward pass must not be made the only available choice for the players. The decision must come from the player, not from the constraint.

In order to achieve perceptual expertise one must become attuned to ‘invariants’ and ‘disturbances’ that specify the -ableness of the affordance. This -ableness evidences an appearance of the affordance, be it visible/audiable/tangible/interactable or actable upon (Turvey et al., 1981). Affordances are ultimately task specifying, and relative to the organism. The definition of said affordances bares no importance, rather the ability to act upon it provides its worth.

In truth, an affordance-driven approach looks much like conditioned games, but the key difference lies within the origins of its design. An example of this being a 7v7 working on defending against long balls. A task constraint of ‘every time the attacking team score by a high pass coming from the middle third of the pitch they score 2 points, rather than 1′. The attacking team will then search for a greater number of attacks that lift the ball into the opposition’s final third, creating lots of repetition for the defensive team to defend against long balls. This example of ‘constraining to afford’ creates a repetition of variable long passes to defend against. 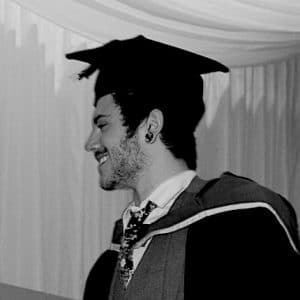 Ben Franks Ben is a current Masters by Research candidate and Associate Lecturer at Oxford Brookes University. His research is currently exploring the field of visual search strategies and the role this plays within the design of learning environments and expertise in elite sport. He is also a Development Assistant for the Boing Kids Primary education project and contributed to the top selling book, 'The Anatomy of a Goalkeeper'.
Previous
Next

The power of storytelling in human evolution and development is often overlooked in sport. PDP Editor and UEFA A licensed coach, Dave Wright discusses how the stories we share and our ability to change the narrative can shape the future of player development. At the time of writing, Player Development Project is almost four-years-old. During our time as a team and an ever-growing network of contributors, we have been fortunate enough to interview and connect with hundreds of experts in a variety of fields in…