How do we help players develop resilience and tactical awareness to cope with defending out of balance? PDP Technical Advisor & UEFA A licensed coach, Dan Wright shares some advice.

When playing an expansive or possession based approach there can be times that you leave yourself exposed, if you misplace a pass or get caught with players high up the pitch it can be costly. In these scenarios it is vital that defenders can actually defend in 1v1 situations and perhaps even worse!

I had noticed that in recent weeks when committing both full backs to attacks our central defenders could be become isolated, or more accurately we recovered slowly and it was causing problems!!

This is a tactical session I ran with the group to recap some key messages.

Make play predictable – when outnumbered you don’t have to win possession of the football, too many defenders want to tackle when actually the best action may be delay or deny. By delaying or making play predictable you allow your teammates to recover into a position to affect the ball and slow the attack.

Recovery – once the full backs are high up the pitch they need an understanding of where to recover to. Ideally we want to get our back four chain back together, but in most instances that isn’t possible. There will be scenarios where they can’t get back or someone else might have to perform their job!

Offside is a defenders friend – we don’t actively play an offisde trap, but I like defenders to be aware that it is a tool, a game of cat and mouse they can play with strikers that allows them to delay or to force passes through to our keeper.

Sweeper keeper – part of playing aggressive and attacking football means your goalkeeper needs to be alert and ready to danger!

Using a half pitch, both full backs start high and wide on the halfway line with a good supply of footballs, the attackers attack the goal in waves of 3. 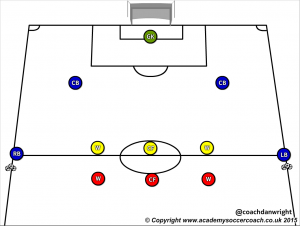 Starting points can include a central defender giving the ball away as below. So as we look to play from the back, we imagine the defender has misplaced a pass. How will we defend, delay and recover to stop the 3 attacking? 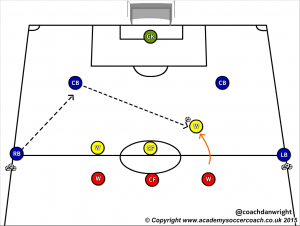 It is important that the Central Defenders ‘address’ the man with the ball, if they have a tendency to drop this can cause problems;

1. The attacker will be allowed closer to our goal which will obviously increase the probability of a key pass/assist or shot at goal, but the increased time on the ball also allows him to make a good decision.

2. By doing this it allows others to ‘take a position’ off his position, so if the defender can show him away from a pass or the goal, then his team mates have a better chance of recovering to a position that can actually benefit the team and affect the ball.

3. I talk about trying to ‘fix’ an overload, so in this scenario they can be outnumbered 3v2, if the defenders defend smartly they can turn this into a 2v2 or perhaps a 1v1. 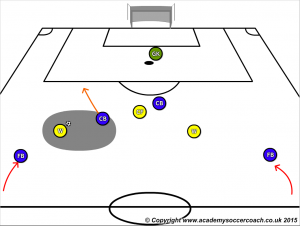 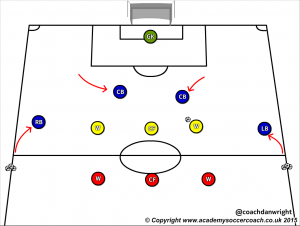 Other starting points could include the full back giving possession away in a central area, as below. 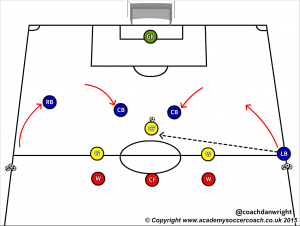 Once we had run this for 15 minutes and discussed a few points, I added a defensive central midfielder and ran a similar practice. The full backs now recover to help the 2x Central Defenders and holding player. 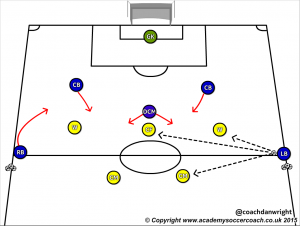 This practice is provides players an opportunity to work on their 1v1 skills with a view to playing forward as much as possible. Players will be challenged with finding space to receive, receiving skills, retention under pressure and of course completing a pass in order to get success. Be conscious of the physical demands within the practice and try to be creative in how you could adapt this to make it easier or harder. Quick Navigation About the Video Additional Information Practice Overview Interpreting the…

1 v 1 Defender on the Shoulder

This practice provides players with a high level of repetition around a 1v1 moment in the game. Attacking players are challenged to run with the ball at speed and win their duel. Defenders are tasked with trying to win the ball from the side and transition to attack if successful. Be mindful of group sizes to keep repetition high and ensure pitch dimensions allow players plenty of space to exploit when running with the ball. Quick Navigation About the Video Additional Information Practice Overview Interpreting…