Regular PDP Contributor and Founder of TOVO Institute, Todd Beane explains the importance of a ‘less is more’ approach to communicating with players on the pitch and asks: Are you at peace on the sidelines?

Johan Cruyff changed the way FC Barcelona played football back in the early 1990s. He did so in the same Camp Nou stadium that people travel from around the world to visit and in which some of the best football on the planet has been played since that time.

But what does this have to do with sidelines and coaching styles?

Johan tells the story of the way the player bench used to be before they remodelled it. The bench used to be dugout of the ground, literally, so that the substitute players and coaching staff sat below the level of the field with only their heads visible. The field itself had such an arch for water drainage that it was impossible to see clearly to the other side of the pitch.

“I could barely see my wing player,” explains Johan Cruyff.

Also the stadium could get so loud that players would have a hard time hearing anything at all from the sidelines.

Again, why is this relevant to coaching style and match management? 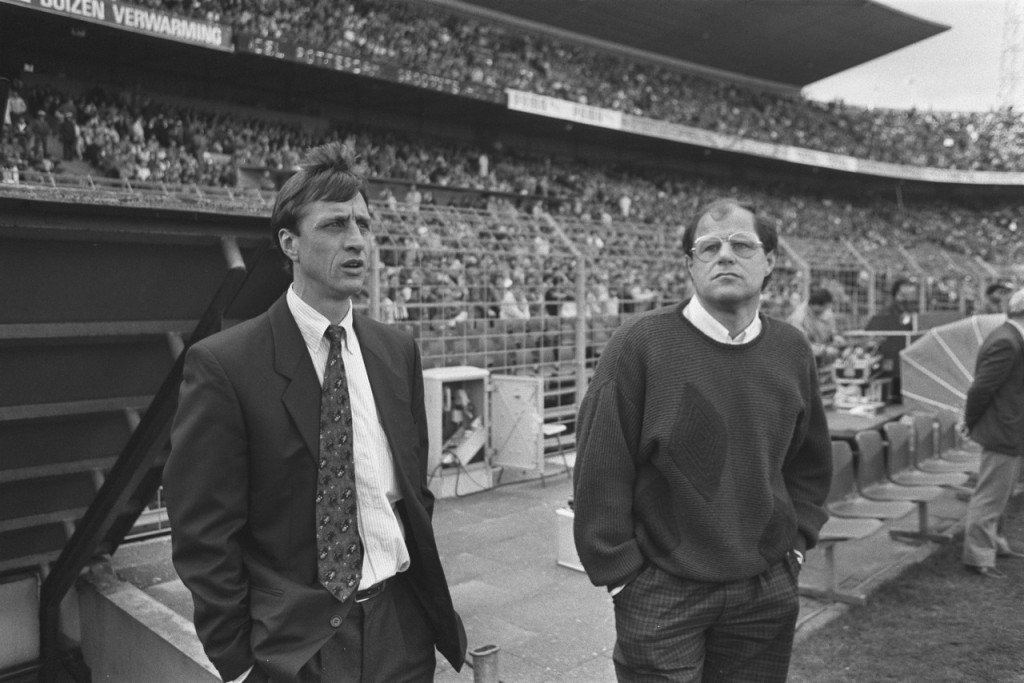 If you did not have the option to communicate with your players with a running dialogue from the sidelines how would that change your coaching style? In other words, if you just had to sit and watch your players perform and only speak to them at half-time would they be better or worse for that experience? The answer may surprise you. Your players just might surprise you.

In youth training, many coaches believe that if they are not screaming at the players constantly and directing their every move, then they are not “coaching”. Even parents start to question the coach, wondering why he is not being active.

But how many top professional coaches do you see running up and down the sidelines giving play-by-play instructions to players. Not many. And it is not just about stadiums that are not conducive to it like the old Camp Nou.

First, the speed of the game is much too quick to allow players to listen to instructions in the heat of the moment and then act upon them with pressing opponents breathing down their necks.

Second, football is a player’s game during which the athletes themselves make quick decisions and execute the game-plan to the best of their ability. It is wrought with mistakes, creative solutions, challenging options and controlled chaos.

Many coaches believe that if they are constantly directing their players’ every move, then they are not “coaching”.

Trainings are for instruction and matches are for celebrating what our players have learned. A coach’s communication at the youth level should be prudent and positive.

It may not be easy, but you can find peace on the sidelines.

Todd Beane Todd Beane is the Founder of TOVO Academy, a football immersion program in Barcelona for players and coaches. Todd was also a Co-founder of Cruyff Football & is heavily involved in the Cruyff Institute.
Previous
Next

Rob Sherman explains the player-centred approach and asks whether it is exclusive to youth development. Rob has over 30 years’ experience, starting in amateur leagues before graduating to be an Area Coach for the Welsh FA and coach of Wales U16. After several years as the Welsh National Player Development Manager and Technical Director, in 2007 he became High Performance Manager at New Zealand Football and coached at FIFA events and two Olympics. After establishing the Asia Pacific Football Academy, Rob returned to New Zealand…