The domain of sports expertise is a much-discussed topic, with many researchers searching to find the one ‘golden thread’ that provides the answer to all coaches’ requirements. However, this research suggests there is no remedy that solves all and that the uniqueness of each individual athlete’s journey towards excellence is clear. In this article, the Football Association’s Talent Identification Manager, Nick Levett, discusses the research behind talent identification.

In a recent study, four interviews were conducted with current England U21 football players to see whether there were any key themes from their unique pathways that could help the people responsible for talent identification and support coach development.

Four international players, registered for three different Premier League teams and one Championship team, were selected for the side that represented England at the UEFA U21 European Championships in 2015 in Czech Republic. These players had 25 appearances between them in the qualifying campaign and nine appearances at the finals stage.

This is their narrative.

Talent identification, the process of “recognising and selecting players who show potential to excel at a more advanced level”1, is crucial within professional football to make sure the right players enter the system. However, clubs have varying scouting procedures and, traditionally, many selections are often completed based on anthropometric measures prior to deeper talent facets and features.

Consequently, talent development is about the “provision of the most appropriate environments for athletes to accelerate their learning and performance”2 but in order to maximise the effectiveness it is important to understand the background of an elite player and key contributing factors to their development.

It is clear that expert coaches value understanding the background of their athletes in order to personalise their education. By understanding the motivators and influencing factors on a player’s pathway we can help them gain maximum effectiveness. Whether that player goes on to become an established senior international is subject to many contributing factors but a coach can support them in achieving their potential.

All the interviewed players had similar primary school experiences of sport, with limited opportunities except playground informal play and after-school clubs. No primary school teams existed where the players attended. Player 1 was fortunate that the coach of his after-school club ended up as his coach later in the professional club academy (and has now become a first-team coach of a Premier League team).

Secondary school provided a variety of sporting opportunities as well as specialist teachers. All players in the study had represented the school in other sports and demonstrated an athletic prowess, transferable skills and game competitiveness. Player 1 was privately educated from 11 years old and attended a school with a good sporting heritage, describing the experience as “intense”.

The benefits of informal play have been well documented and acknowledged as a key part of player development. All the players highlighted their love of football and the desire to play at any opportunity they could. All played on the streets they lived on: Player 3 discussed going to play in his local ‘cage’ area in inner-city London, whereas Player 2 highlighted how his parents would take him to the park to play and would join in themselves, even into his teen years.

They all talked about these experiences fondly, recognising that they provided motivation as well as tough experiences. All played against other children older and younger than them, sometimes by three or four years, which provided a test of physical and technical skill. This would have also required resilience and perseverance to deal with being the youngest in this environment.

Researchers3 recognise the importance of informal play within the developmental path of elite footballers compared to sub-elite players, and the narratives of the four interviewees would support this argument.

There was mixed experiences about the importance in their formative years of playing for a junior club. Player 3 never attended a local club, having moved from a soccer school directly to a professional club, having never played a formal game of football before this. Player 1 joined a local club, encouraged by parents, and maintained links with friends from that team to this day, with another player from that team also becoming a professional footballer. Player 4 played in local football for three years before signing for the professional club, as did Player 2.

The discussion between early specialisation, early sampling and multi-sports continues within the literature, and regular bloggers highlight the importance of their argument, depending on their philosophical stance. Player 3 started relatively late in football at nine years old in a formal setting and never played for a team before that. Whilst he played other sports at school, he never took part in another sport to any level, similar to Player 4.

Player 1 played tennis seriously to a representative level from 8 to 14 and had lessons twice a week, competing for a club and in tournaments. He recognised that this gave him independence and also taught him about “responsibility as you can’t rely on anyone else”, which he feels is an important skill for life.

Player 2, whilst physically a late developer, played rugby league to a representative level and turned down a scholarship with a professional club at the age of 14 to concentrate on football. The skills learnt in this environment are likely to have been beneficial and transferable to his football experiences, especially linked to the maturation pathway he was on.

It is clear from interviewing three of the four parental figures involved in the elite players’ lives that this varies significantly but each has similarities. Whilst one comes from a stable and traditional ‘2+2’ family, one comes from a single parent home, having never met his father, and another from a split family in the teenage years. The fourth is from a strong family unit with lots of close relatives.

Although circumstances and specifics are nuanced, what is clear is the support they have each been given. Player 2’s parents highlighted how they focused on ensuring he “became the best he could be at whatever he was doing”. Player 4’s mum swapped shifts around within her employment to ensure her son could attend training and changed jobs when this became an issue, very clearly putting him first to give him the best opportunity.

The mother of Player 1 wrote to “over 100 charities for educational support” to pay for his fees to be privately educated because she didn’t want him going to the state school that was deemed likely to be a poor experience for her son.

The reality of life plays different hands in a person’s life, and helping to overcome adversity through these experiences is essential. Dealing with disappointment is an essential skill of an elite athlete. Player 1 had a major family trauma at 13, leading to cutting contact with his father but “making me really stubborn”. Player 2 dealt with being made to play in the year group below because he was too small to play in his own age group, which he says “was horrible, the worst thing ever”. Player 4 grew up in a really difficult neighbourhood, experiencing being burgled, crime and drugs in the local area on a daily basis.

The challenge for Player 3 is he has always been a high-flyer, playing up year groups in club and international football, flying through his school exams with top grades and life was easy. It is only now, as he has had four loan spells at other professional clubs, that he is learning to deal with adversity as things haven’t been plain sailing.

This raises the question, if the road to becoming an elite athlete is never linear, should we as coaches put in speed bumps along the way to help them develop these skills? I believe we should, alongside appropriate support to help them as they fail, as in the long term these personal skills are vital.

In Steve Biddulph’s 2003 book ‘Raising Boys’, he talks about the importance of teenage boys having a role model or mentor they can talk to about life, beyond that of their dad. This was evident for all the interviewed players, either forced through life circumstances or from meeting these people along their pathway.

The Differentiated Model of Giftedness and Talent4 suggests that there are elements of chance that appear on the journeys towards becoming talented. It could be determined the same appears in these players’ journeys, with several examples appearing.

These narratives highlight the nuanced pathways that young people take, from formative years in and around family and siblings to interaction with different peers and coaches. They are all unique but with varying themes evident. As coaches, we need to understand our athletes more, as ‘people’, in order to maintain effective learning environments.

What is clear is that if we equip young people with learning strategies, coping capabilities and the ability to adapt, they will go on to maximise their potential, whatever the world of genetics may also have in store!

Harry Kane of England looks on during the UEFA Under21 European Championship match between England and Italy at Andruv Stadium on June 24, 2015 in Olomouc, Czech Republic. Photo: Michael Regan / Staff 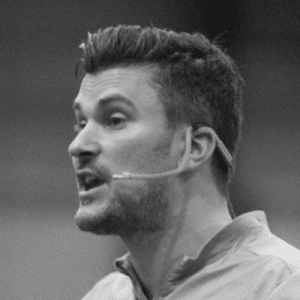 Nick Levett Nick Levett is the former Talent ID Manager at The FA and now works at UK Sport as the Head of Talent and Performance.
Previous
Next

Ben Bartlett, Senior Youth Coach Educator at the Football Association, gives some fascinating real-life examples to explain the importance of aligning a team’s ideal model of performance with the capabilities and behaviours of its players and the practice of its coaching. There is a Japanese proverb, highlighted by James Kerr in his book ‘Legacy’, which states that “Vision without action is a day-dream; action without vision is a nightmare”. With this in mind, lecturer and coach developer Bob Muir proposed the model below, asking coaches…