Tactics are an important part of football. But how prominent should they be in our coaching when we’re working with younger players? As coaches, it’s sometimes easy to focus too heavily on tactics, perhaps at the expense of other crucial areas of development for the kids we’re working with. In this article, we consider when to include a tactical focus in our coaching, the importance of not overloading our players, and how to encourage tactical awareness while developing independent decision-makers.

What do Our Players Need?

First, we should consider what our players need from us. What do they need to understand going into a game, and how much of that focus should be tactical? “Ultimately, their objective is to have the best performance they can on the day,” says James Coutts, Coaching Advisor at PDP. “As coaches, we should ask how we can give them the best chance of succeeding. That isn’t always more tactical information.”

“Tactics always exist in the game,” explains PDP Co-Founder Dave Wright. “But the game can often dictate what decisions are made and what tactics are employed. So the tactics and the technical side are interconnected, because there may be certain tactics that your players can’t implement if they don’t have the technical ability to do so.”

Ultimately, we need to find a balance that’s suited to the needs and abilities of our players. “This isn’t the elite level,” adds Wright. “We’re still talking about kids playing the game having a positive football experience as opposed to the coach putting on a tactical masterclass.”

When to Coach Tactics

It’s important not to bombard our players with tactical instructions. “People absorb information in different ways. The danger of overloading tactically is that players switch off,” explains Coutts. “I gear towards individuals or units when it comes to in-depth tactical information. If it’s for the whole team, I keep it as short and snappy as possible.”

“Video is becoming more accessible. If you have an opportunity to show players a clip related to something they’ve been working on, I think delivering information in such a punchy way is valuable,” says Wright. “There’s so much going through players’ heads on game day that you just want to keep things as simple as possible and let them enjoy the moment.”

When coaching tactics, it also helps to remember that our players may have a different perspective to us. “Tactical information is very subjective. How we see the game as coaches is our opinion, and our players might have different views,” explains Coutts. “I feel there’s a real danger that sometimes we deliver tactical information in an objective way, but there’s no exact thing to do in any moment of the game. It’s about what picture you (the player) see at the time.”

“It’s a fine line, because coaches do have a responsibility to help players understand the game and develop things like awareness and game management,” says Wright. “But, for me, the way we design our environments will be more effective than just talking about it.” This means accepting that we can’t control everything, being prepared to give our players some autonomy, and letting them learn through making their own decisions.

“As coaches, one of our main objectives has to be creating problem solvers,” says Wright. “Which we can do by setting players tasks within the environment. That could mean a team challenge involving tactics — for example, defending deep and trying to break on the counter, which will add to their tactical toolbox and help them when they go on and play senior football. But while we can set the task and we can guide the players, the various ways they go and do it might be very different.”

“Giving the players ownership is critical. Because if we can’t support them in solving problems, they’re going to become overly dependent. As coaches, we probably want to go from teacher towards facilitator as our players progress through the age groups.” 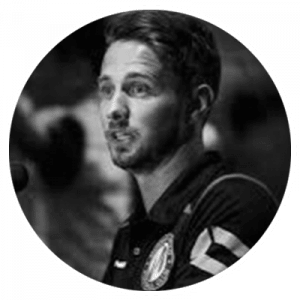 James Coutts James Coutts is a Coaching Advisor at Player Development Project. He is a former Southampton FC & AFC Bournemouth player, has coached NPL Football in Australia and has completed his AFC A-License through Football Federation Australia.
Previous
Next

Paul McGuinness was immersed in the world of Manchester United as a player and coach for 28 years. Paul learnt his craft from his father Wilf, a Manchester United Manager and was mentored by the likes of Sir Alex Ferguson, Sir Matt Busby, Tony Whelan and more. PDP Editor Dave Wright sits down with Paul to discuss his personal journey, sharing incredible stories of the culture and family values of the club and how he and his colleagues instilled them in the academy. Paul also…

A Guide to Communicating With Children

Communicating with children is a fundamental part of youth coaching. How we interact and connect with our players underpins everything else we do, making it vital that we learn to communicate effectively and form positive relationships. In this article, we explain why it’s so important to connect with our players, discuss the value of empowerment in learning, and consider some effective strategies for communicating with children.  In This Article The Importance of Connecting Knowing When to Intervene Effective Communication Strategies Empowering Our Players Communicating With…