Mindset. Is it just another buzzword or could it be the final frontier of player development? Do different mindsets affect player development in different ways? Research certainly suggests so. James Vaughan explores the latest research around mindset and imagination, and explains how this can make all the difference in high pressure situations.

Research suggests that we need to change the influences that affect a player’s mindset, to unlock the possibilities and harness their full potential. In this article we will explore how mindsets come about, why we have different mindsets, how our mindset affects the way we see the world and how this influences skill acquisition.

If you’ve listened to Jose Mourinho or Brendan Rodgers talk in interviews and press conferences, mindset is a term you will be familiar with. After returning to the Premier League, Mourinho said a different mindset was required at Chelsea. At the end of last season Jose said his challenge was to create a “culture of being comfortable with the pressure of trying to be top of the league…It is not something you do with a click.” Brendan Rodgers also mentions mindset regularly, and views failure as an essential step in creating a successful mindset: “People say what’s your success? The word for me is failure… How you succeed is how you deal with failure.”

These ideas are founded on the work of world-renowned Stanford psychologist Carol Dweck. Dweck’s work has established the key differences between people with a ‘fixed’ mindset and those with a ‘growth’ mindset. People with a growth mindset seek out challenge and value failure, while people with a fixed mindset see challenge as threatening and avoid failure at all costs. Thinking about this in a football context, how can mindset affect a player’s development journey?

Essentially, societal expectations create behaviours, which are linked to expected outcomes – or to put it even more simply: if I do this, I get this. Consider Diego Maradona’s ‘hand of god’ goal in the 1986 World Cup and the different cultural expectations and outcomes involved. The event was polarising; in South America, where the ability to trick authority figures, bend the rules and think outside the box are accepted behaviours, he gained approval. In England and most of Europe, however, where ‘playing by the rules’ is valued, he was demonised. Maradona’s behaviour was tied, as is often the case, to the societal expectations (the cultural assumptions, traditions and social norms) and outcomes he had come to value. Jose Mourinho regularly refers to the importance of mindset. Photo: In Mou We Trust

Because of the influence of society and culture in our development, the constraints-led approach to skill acquisition has started to incorporate these factors, calling them socio- cultural constraints. In the same way that playing surface and area size are constraints that affect skill development, so too are the socio- cultural expectations that shape our mindset. As motivation, psychology and decision-making research develops, the importance of these socio-cultural constraints becomes more and more apparent.

The key question becomes, are the expectations that direct our lives a cultural hangover or an essential part of a functioning society?

Societal expectations affect us all, influencing everything from what we wear and how we talk, to how we think. These expectations can come from the people around us, like family, friends, teachers and coaches – people who often have our best interests at heart. Or they may come from irresponsible advertising and sensationalised media – which arguably don’t consider or care how they affect our mindset unless it influences their bottom line.

The key question becomes, are the expectations that direct our lives a cultural hangover or an essential part of a functioning society?

Expectations create a barrage of cultural noise that is often most powerful in our adolescent years, when the need to conform is often confused with our natural need for belonging.

In these critical, highly impressionable years we start to form our identity, develop our character and refine our thought processes. We’re developing the mindset that leads us through life, making exposure to the controlling influence of expectations even more harmful at this time. Most expectations shape motivational processes and mental habits that breed conformity, but how far does this influence spread? Can we see these mental habits on the football pitch or do these habits transcend the football pitch? Are we developing a generation of conformists or inspiring a generation of creatives?

The world is not designed to enhance our natural creative abilities or develop creative football players. Even our schools and businesses have evolved to promote the values and reinforce the expectations that kill creativity.

But our academies and football clubs aren’t really any different. Is anyone recognising the need for change that could develop better people and better players? Crucially, we need to find the counter-balance to the influence of expectations on young players in order to develop the right mindset. A clue to the answer to this conundrum may lie in Barcelona. 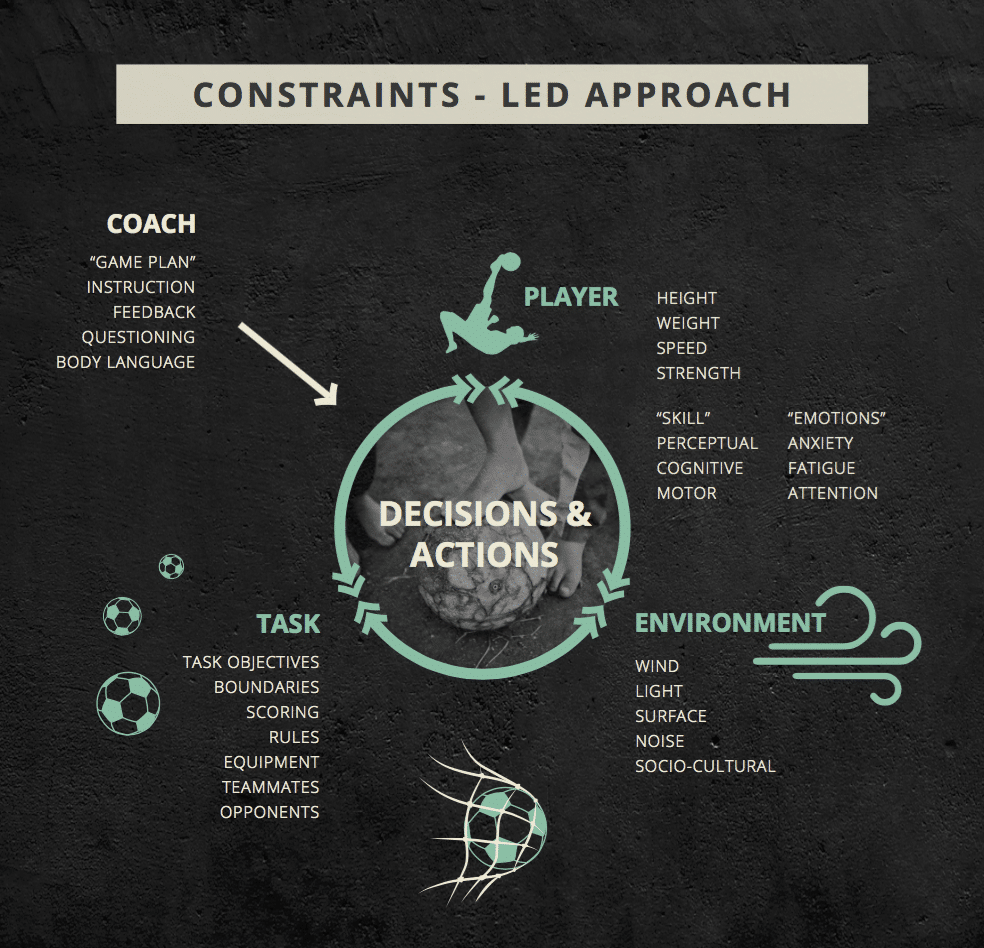 Imagination: The Foundation for Change

“FC Barcelona’s academy is different from other academies because physical preparation is considered to be a matter of secondary importance. Definitely, the most important is the necessity of technique and the development of imagination in the young player”

Many development environments blindly reinforce the cultural expectations that restrict thinking, taint motivation and control actions. However, La Masia is different. At FC Barcelona’s academy they have been pioneering a revolutionary change in values. They value something intangible, something you can’t measure and evaluate – the imagination of their young players. But what does this mean? FC Barcelona describe the focus of training at La Masia in this way:

“The player should be trained in such a way that he can imagine the best solution during the action and have the technique that allows them to implement it.”

To understand the focus of training at La Masia we must understand how players process information. Information like the movements of other players, the speed of the ball and the in-game challenges in each moment. In every moment we are interpreting information and creating a unique perceptual landscape, a picture from which we make our decisions. To better understand this, let’s consider how information processing works.

Skill acquisition was founded on the idea of information processing, whereby information is processed by a ‘central command centre’, within the body’s nervous system, to produce a movement response6. This traditional approach suggests three steps: stimulus identification, response selection, and response programming.

Many modern coach education courses highlight this within a football context and describe it as a decision- making chain: Perception – Decision – Execution (PDE)7. Within this framework, player action is based on perception of the game, which informs a decision (the selection of movement) and then the execution of a movement pattern (performing a technique or skill). However, the information approach has limitations. While it recognises stimulus identification and the use of information to guide movement, it fails to recognise the role the environment plays in providing this information. It also fails to appreciate that players may look at the same scenario and see a completely different picture. It fails to recognise the importance of individual perception, which is shaped by our mindset. Taking a more holistic approach to player development, then, explains skill acquisition as the result of a constantly evolving relationship between the person and the environment8. This newer school of thought is founded upon the ‘dynamic systems theory’ (presented in Mark Upton’s recent article in Issue #5 of PDP Magazine) and ecological psychology, both of which place the emphasis on the two-way relationship between the player and the environment5. Perhaps this statement best surmises these concepts in relation to movement:

The Role of Imagination in Information Processing

“The player should be trained in such a way that he can imagine the best solution during the action and have the technique that allows them to implement it”  The role of imagination may add another link to the Perception- Decision-Execution (or Action) decision-making chain and turn it into a cycle, where imagination provides a link between action and perception.

Our perception can be influenced by our expectations (what we expect to see) or our imagination (boundless possibilities). During the execution of a movement, divergent, creative and imaginative thinking may allow an attacker to re-evaluate the perceptual landscape – to see new solutions to the current football challenge they’re faced with. This is important because the picture evolves as defenders respond (they may shift their weight, or make and unexpected movement, for example) to the attackers initial movements. This requires the attacker to re-evaluate the new information they are receiving and then potentially make a new decision and transform their movement pattern. In this situation, what do you think would be more beneficial to the attacker? A mindset based on expectation or imagination?

FC Barcelona recognise that this imaginative thinking takes place “during the action”. Research suggests that continually thinking about different possibilities during the performance of an action may represent the use
of imagination and the foundation of creative behaviour. Combining imagination with a rich skill set would even allow the transformation or combination of techniques into new skills. This transformation may lead to a moment of creativity, a movement pattern new to the movement culture of the sport -perhaps the best example being the birth of the ‘Cruyff Turn’ in the 1974 World Cup. In that moment, Johan Cruyff was able to process all the information presented to him about the defender’s movements (and much more), and had the skillset and imagination to produce a brand new technique to solve the situation.

A mindset bound by expectations in that same moment, could not have done so. Imagine the possibilities if the next generation of footballers had a mindset based on imagination rather than expectation.

This blog contains two videos of a modified 3v3. In this session, PDP Lead Researcher & AIK Academy Coach, James Vaughan changes task constraints and encourages player reflection to create opportunities for learning with space for creative expression. A couple of weeks ago I had the opportunity to work with just 6 players for a whole session. This is something I really enjoy after years of coaching futsal. However, working with small numbers of players for a whole session can be daunting. In this blog, I want to…